So far so good, says Russell 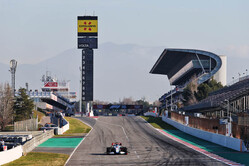 Over the course of his first morning in the FW43, George Russell posted a best time only marginally slower than anything he managed during the entirety of the whole of last season's test - not forgetting the fact that his team missed the first two and a half days.

More importantly however, the Briton has put 73 laps on the new car, which is 33 more than he managed in the opening test twelve months ago.

So, in terms of pace and reliability, things appear to be looking good for the toothpaste liveried car which will hopefully put the smiles on the faces of everyone at Grove.

"It's feeling good," the Briton told reporters, "and it's definitely an improvement on last year.

"It's difficult to get a read so far," he subsequently admitted, "but from within it feels nice to drive.

Having missed so much of last year's test, it was significant that the FW43 was first out this morning.

"We had an intense morning planned and to get everything in it was important to get out from the beginning," smiled Russell. "Also off the back of last year it was psychologically important for all of us and for everybody who has worked day and night back at the factory to see their car go out first.

"From the struggles of last year, it was incredibly tough times for the people back at Grove last year, when they are working absolutely flat out to try and make things ready and work in double time. So it was a relief for all of us and now we can get cracking with our test programme.

"Last year was far from ideal and the team have done a really great job to achieve that and the build quality of the car is a much [higher] standard compared to last year. Things fit properly and the car looks better from a design perspective, so I think overall it's been a very positive morning.

"Everybody was a bit lost year because they had no work to do with no car here. They are excited for the new season. It was definitely a character-building year and I'm confident we can go racing this year and have a bit more fun than last year and that's what we are all hoping for."