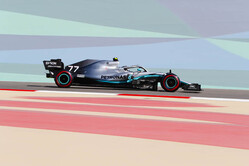 Officials in Saudi Arabia reveal plan for a purpose-built racing circuit with the aim of hosting a round of the Formula One World Championship by 2023.

As previously reported, the proposed Qiddiya circuit, which has been designed by former F1, WEC driver and GPDA chairman, Alex Wurz, forms part of an ambitious sports and entertainment facility, which, in addition to the circuit, would include an indoor and cliff-top stadium, shops and a luxury hotel.

The facility is one of Saudi Vision 30, the Crown Prince's ambitious plan, first announced in 2016, to diversify the economy, making it less dependent on oil while at the same time promoting culture and lifestyle in a bid to boost tourism.

Speaking at today's unveiling of the proposed circuit lay-out, which saw Nico Hulkenberg 'drive' the track in a simulator, Chief executive officer, Mike Reininger told BBC Sport that the circuit would be ready in time to host an F1 race in 2023.

"We're building a facility in the hope there will be a deal struck and there is a race here in Saudi," he said.

With Formula Money having revealed that Formula One Management has not registered a trademark for a Saudi Grand Prix, though it has for races in Poland, Bulgaria and Portugal, as well as Miami and Las Vegas, Reininger admitted he was "not specifically engaged in talks with F1 day to day" which are "mostly being driven by the general sports authority and the motorsports federation".

"We're building a facility in the hope there will be a deal struck and there is a race here in Saudi," he said, adding that "the formalisation of a race is not for us at Qiddiya. It is outside the confines of the project itself. But we are building a facility that will be able to host a really world-class event as one of the signature items we will have on offer here at Qiddiya as we open in 2023.

"We are actually building a series of facilities both on-circuit and off-road in one aggregated place which really hasn't been assembled anywhere else in the world like this. The centrepiece for us is going to be the Grade One circuit."