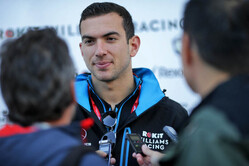 When Nicholas Latifi makes his F1 debut in Melbourne next March, there will be eight drivers younger than him on the grid – Pierre Gasly, Alex Albon, Esteban Ocon, Max Verstappen, Charles Leclerc, George Russell, Lance Stroll and Lando Norris.

After four (full) seasons in F2, finishing runner-up to Nyck de Vries this year, the Canadian enters F1 at a time there will be six rivals on the Melbourne grid who made their debuts as teenagers.

Nonetheless, Latifi defends his late arrival on the F1 grid, feeling he would not have been prepared to enter the sport any earlier.

"I think if I had gone into Formula 1 two or three years ago, I wouldn't have felt as ready and prepared as I do now," he says, according to Motorsport Week.

"A lot of people don't realise that I started racing quite late in terms of karting, so my motorsport age, I only started racing karts at 13 years old, compared to guys like, in extreme cases, (Max) Verstappen, Esteban (Ocon), I think they both had a kart at four years old. When you take that into consideration from when I started to when I'm in F1, it's about 12 years.

"It's the same for a guy like Max, who joined F1 when he was 17 years old, 13 years from when he started driving. It's about right, let's say.

"Compared to the more recent rookies, I'm definitely on the older side," he admits, "but in terms of my experience level in motorsport, I think it's right for me. I feel the most prepared and ready that I've ever been, and ready to make the step up."

His teammate at Williams is former F2 rival George Russell, who won the 2018 title.

"Obviously George is one of the highest-rated junior drivers," says the Canadian, whose father owns a 10% stake in rivals McLaren. "I'm very much looking forward to going up against him. For sure he'll be a good benchmark and good reference to me, helping me to learn.

"He's not going to be a rookie next year anymore, so I assume he'll have some advantage, but I think we're going to work very well together.

"Where the results are and performance is going to be, it's obviously very difficult to say, but regardless my goal is still going to be to try and extract the maximum out of the package that I can."