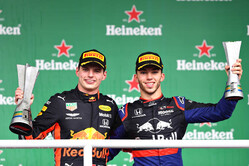 With absolutely no fanfare, Honda has committed to continue in F1 in 2021 with both Red Bull and Toro Rosso.

The news came via social media rather than an official press release, with Red Bull tweeting: "We'll be powered by Honda in 2021! The Team are delighted to confirm that we have extended our partnership to use Honda Hybrid power" and Toro Rosso following up with "It’s great to confirm that Honda will continue to supply the team into the new era of Formula 1", both tweets were subsequently retweeted by the Japanese manufacturer.

The decision to continue ends fears that the Japanese manufacturer might use the overhaul of the rules in 2021 to leave the sport at the end of next season, even though there is little change to the engine regulation in the first couple of years of the new era.

While Honda has enjoyed success with both teams this year, the Japanese manufacturer has long expressed concern at the ever increasing costs facing engine suppliers.

Talking to Red Bull-owned ServusTV, Helmut Marko admitted that the decision to continue came as a "great relief", a feeling that will be echoed by the sport's owners at a time three of the manufacturers are known to be pondering their futures in F1.

Along with three wins courtesy of Max Verstappen, Honda has graced the podium twice this year with Toro Rosso, Daniil Kvyat finishing third in German and Pierre Gasly second two weeks ago in Brazil.