Verstappen sets the pace at a chilly Austin 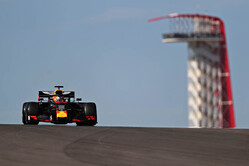 Like yesterday, it is unseasonably cold, which Ferrari is hoping will play into its hands, should temperatures remain at this level.

As in Mexico, Nicholas Latifi is in a Williams for this session, this time replacing George Russell.

For its home race, and on the back of a remarkable drop-off in performance, Haas is trialling a new front wing today, and while the team is looking ahead to 2020, if the American team finds it boosts performance it could be used in the remaining races.

Talking of 2020, Pirelli has made its prototype tyres for next season available today, with all the teams set to run them in today's sessions.

And again, a number of teams are to run aero rakes in today's sessions as they gather data for next season. Interestingly, one of those teams is Mercedes, which usually sheds such appendages at the end of pre-season testing.

The lights go green and Bottas, with said rakes in place, is first out of the blocks, followed by his Mercedes teammate. Both are on the mediums.

"These bumps are insane," warns Hamilton, "I don't know if this track is safe". Indeed, a number of new bumps have appeared since last year, including a big one at the pitlane exit.

Hulkenberg is told that his GPS is "playing up", so the team isn't aware who is around him.

TV cameras pick up on Hamilton riding a nasty bump at Turn 1.

Verstappen goes quickest with a 38.423. The Dutchman, like Vettel, running the unmarked prototype tyres.

"There's a problem with the engine," reports Leclerc. "Something happened in Turn 9," he adds. "I was just driving normally, I don't know what happened."

To ensure confusion at Haas, Grosjean, with the old front wing, posts 37.759 to go top. Like his teammate he is on the yellow-banded rubber.

"There's a big jump, not a bump, at Turn 9," confirms Magnussen.

A 36.424 sees Albon go top on the mediums, ahead of Grosjean, Stroll, Magnussen, Verstappen and Perez.

As Bottas heads out again, he is told that he is running the 2020 softs compound.

Looking at the number of mechanics wearing wooly beanie hats, it's reminiscent of pre-season testing.

Still on the 2020 rubber, Verstappen improves to second with a 36.490, the Red Bull, sending out great showers of sparks as it rides the bumps.

Exceeding the track limits at Turn 19, Albon is the first driver to have his time deleted, the corner using the electronic detection system previously used at Spa and Mexico.

Kvyat goes third with a 36.986, as teammate Gasly goes fifth, ahead of Ricciardo, Stroll and Magnussen.

After 25 minutes, Hulkenberg, Leclerc, Latifi and Sainz have yet to post a time.

As he goes top on the mediums, Verstappen (35.175) is told that "most people on the mediums have gone quicker and quicker". "Brakes are still pulling," he replies.

The Red Bull driver's time is subsequently deleted after it is confirmed that he ran wide in Turn 19.

Out come the yellows as Latifi pulls off track at Turn 7. He subsequently gets going again, reporting that the car "suddenly went into neutral".

Meanwhile, Norris reports that his headrest has come loose. He subsequently pits.

Verstappen complains about an Alfa (Raikkonen) up ahead which is "not moving". Nonetheless, the Dutchman subsequently posts a 35.546 as Vettel goes second with a 35.734.

Hulkenberg has a shifting issue and consequently pits.

Stroll and Perez, both on softs, go fourth and fifth.

At the point where the extra set of tyres have to be handed back, it's: Albon, Verstappen, Vettel, Stroll, Perez, Grosjean, Gasly, Kvyat, Ricciardo and Hulkenberg. Leclerc is the only driver yet to post a time.

A brief spin for Sainz in Turn 5 as he loses the rear end. "The tyres are destroyed," he reports.

Switching to the softs, Vettel goes quickest in all three sectors, the German crossing the line at 34.226.

Leclerc runs wide and over the grass at Turn 9 after falling foul of the bumps.

Hamilton is told that he is losing out to his teammate in Turns 5 and 6.

On fresh softs, PBs in all three sectors see Hulkenberg improve from 13th to 10th, the German's previous issue understood to be hydraulics-related.

Early, days but both Alfas worryingly off the pace.

Sainz enquires if others are improving on their second flyer on the softs. "Generally not," he is told.

Switching to the softs, Ricciardo goes second (35.263), as former teammate, Verstappen, also switches to the red-banded rubber. While the Dutchman goes quickest (34.057), he appeared to run wide in Turn 19.

Leclerc goes second with a 34.126, as Gasly goes fourth (35.008), ahead of Ricciardo, Albon and Leclerc, who had his previous time deleted.

"It's interesting to continue on these tyres," says Sainz of the prototypes, the Spaniard currently ninth quickest.

The Briton posts a PB in S1, but subsequently backs off, though it is not clear why.

No more running for Latifi since his issue at the start of the session. The Canadian, who, according to Williams, suffered a gearbox issue, has only completed 7 laps and is now out of his car and wearing his civvies.

"One of the Haas' doing his usual stuff," says Perez as Magnussen - for it is he - doesn't make things easy for the Mexican.

"This is the bumpiest track in the world," declares Hamilton.