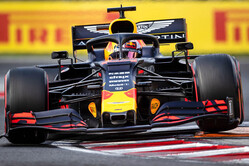 Though Lewis Hamilton is essentially just 14 points from his sixth title, it will not have gone unnoticed by the Briton that he has failed to claim a pole position since the sport returned from its summer break, with Ferrari claiming all six since the championship resumed.

Meanwhile, as he targets a third successive victory at the Autodromo Hermanos Rodriguez, Max Verstappen admits that, certainly in qualifying, nobody can touch the SF90.

"They gained over the year more and more power," said the Red Bull star, "and it's very hard to beat that to be honest.

"Even if you have a car which is half a second faster it's still almost impossible to beat them in qualifying," he continued, "as you can see with Mercedes.

"They definitely have the best car compared to them and still in qualifying they are lacking lately. It's just insane the speed difference they have."

Asked why Red Bull appears to have gone off the boil, pace-wise, in recent races, the youngster said: "We brought updates and others did too, and I guess we didn't make that performance step like we did last year compared to them. I guess it's as simple as that.

Asked about his prospects this weekend, and the chance of making it a hat-trick, he said: "This year, honestly, from the Honda side we don't know how competitive it's going to be. But let's see in practice.

"This year will be a little bit more difficult because in comparison to Ferrari and Mercedes this year we are not maybe that far ahead with the car and Ferrari is just super quick on the straights. It's very hard to gain that time back in the corners, especially in qualifying."