Brazil pipe dream has Carey racking up the air miles 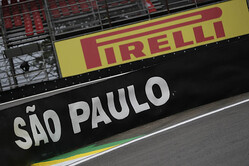 Straight after last weekend's French Grand Prix, Chase Carey was in Brazil for the second time in as many weeks.

According to some sections of the media a deal whereby the Grand Prix will head to Rio de Janeiro in 2021 is done and dusted, especially as the move has the backing of Brazilian President, Jair Bolsonaro who has close ties with the city.

"No one is trying to take Formula One away from Sao Paulo," insisted Bolsonaro at a press conference in Brasilia attended by Carey and Rio's governor, Wilson Witzel. "The race will stay in Brazil, that's what counts."

Of course, this being F1, what really counts is money, and this is where the Rio move appears to fall down.

Despite Bolsonaro's support for a Grand Prix in Rio, there are a few minor details that might stand in the way.

First off, there is currently no circuit, indeed, a circuit plan has not even been submitted to the FIA Circuits Commission. Then again, there is the little matter of the $200m required for the project, which is a little bit more than one is ever likely to win at casino online usa.

Following Brasilia, Carey headed to Rio to meet with the owners of TV Globo, the broadcaster that enjoys the sport's biggest TV audience. Despite the supposed positivity of the Brasilia meeting, the F1 supremo left Rio without a new deal with the broadcaster.

From there, Carey headed to Sao Paulo where he met with the city's governor, Joao Doria, a possible presidential candidate in 2022 who insists that the race will remain at Interlagos, where further improvements are being made courtesy of considerable investment.

With money being the lifeblood of Formula One, and the principal reason Liberty Media bought the sport, Carey should be aware that the Rio event is political posturing, which if nothing else will have prompted Sao Paulo to come up with the necessary funding, a click here tactic mastered by the sport's previous supremo.

As ever, Carey is giving little away, other than insisting he wants what's best for the sport and its fans (yawn), carefully avoiding mentioning the fact that the (Sao Paulo) bird in the hand...

After Sao Paulo, Carey headed to Miami, which, despite the fact an entirely new venue is being considered as the sport seeks a second race in its back yard, currently appears to be as much of an F1 pipe dream as Rio.