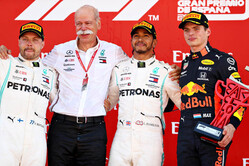 As previously reported, Britain is one of the few countries that publicly releases TV audience data and it comes courtesy of the Broadcasters’ Audience Research Board (BARB), and such is the respect for its data that it is the standard by which the UK TV networks sell advertising spots.

In December, seemingly knowing something that most race fans in the UK didn't, F1’s global research director, Matt Roberts claimed that despite all but one round of the 2019 season being shown live on ly on pay-per-view channel Sky, Channel 4's highlights show would see an increase in viewer numbers courtesy of its prime time broadcast slot several hours after the race actually finished.

“Channel 4 will have the highlights next year and we have worked with them to ensure they show the races in a favourable prime time slot,” he said. “We estimate that we will actually have more viewers next year in the UK (thanks to this prime time slot) than we had this year.”

After five rounds of a 2019 season which has thus far witnessed five 1-2s for Mercedes, viewing figures are down 4.2 million, as BARB, which calculates its totals cumulatively, as does F1, and involves counting each viewer of each race separately even if they are the same person, reveals that the first five races were watched by 8.2 million viewers on Channel 4 compared to 12.4 million in 2018.

Indeed, the Barcelona race saw a drop of 765,181 viewers, down 30.5% on 2018, when the race was the second most-watched broadcast of the week. Twelve months later, and a travel programme about the city of Hamburg and Gogglebox both eclipsed the F1 highlights show which had slipped to sixth in the standings.

While the British broadcaster was only too keen to proclaim increased viewer numbers for this year's season opener, since then the silence has been (understandably) deafening.

As Forbes makes clear, the biggest potential losers are the team as around 26% of their revenue comes from sponsorship, and less viewers means they are forced to charge less.

Under its new contract with F1, Sky's fees have almost doubled, the broadcaster now paying an estimated $150m (£117m) annually.

However, when one remembers that the teams share 68% of the sport's underlying profits as prize money, which has now become a bigger earner for them than their sponsorship deals, though losing out in terms of the revenue they can expect from sponsors they are raking it in courtesy of pay-per-view.

That said, with F1 keen to introduce its F1TV streaming service to the UK, and with an eye on those viewer numbers, Sky, whose contract ends in 2024, is probably going to want to renegotiate some time soon.

Indeed, there might well be point when Sky's owners, Comcast, wonder why they are shelling out so much money for F1, much like the time a senior executive at Ford-owned Jaguar queried the millions being paid to an employee he had never heard of, a certain Edmund Irvine Jr.