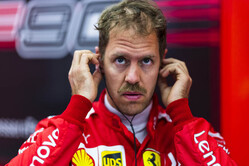 Though it has never quite reached the proportions of some of the titanic driver battles the sport has witnessed over the last 69 years, the rivalry between Sebastian Vettel and Lewis Hamilton has had its moments.

Though there have been some minor falling outs and some red mist moments, the pair enjoy scrapping and admit to mutual respect.

In the wake of a disappointing Bahrain Grand Prix which appeared to suggest that the German has learned little from the mistakes that littered the second half of his 2018 season, rival Hamilton was the first to spring to his defence.

"It happens to all of us," said the Briton when asked about Vettel's unforced spin in Bahrain. "Just because you're a four-time champion doesn't mean you're not going to have off-weekends.

"It's more cumulative," he continued. "If you look at Vettel's career he's had stunning performances that far more outweigh the weaker races, and when he's spun for example, they are minuscule on the status that he's accumulated and created.

"There are always times where you happen to just not get the right car set-up," he added. "You guys don't get to see all the little things that we're doing, and it just doesn't happen to work that weekend. And the differences are so small, and yet they look so big."

Told of Hamilton's comments today, Vettel responded: "Maybe he's the only one that doesn't have a short-term memory...

"I think we've been around a long time," he continued, smiling, "and obviously as much as I want to beat Lewis, he wants to beat me.

"But sometimes you never know what is going on with other people in their teams and so on, unless you are racing them in the same team, in which case you know a bit more.

"Sometimes things might not go your way, but when you don't understand exactly or you don't know, I think it's very difficult to say much about certain things.

"But I also know nowadays people's judgement doesn't go further than a week, forward or backwards," he added. "It's part of life. I didn't know he said anything nice, but it's nice to hear."

Meanwhile, elsewhere in the paddock, asked if the mistakes suggests that he has the psychological edge over the German, Hamilton said: "I don't go into a battle with him and feel that I've got one up on him, or anything like that.