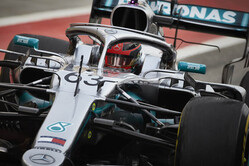 In those long months ahead, as Williams seeks to sort the fundamental issue with the FW42, George Russell can at least reflect on the day he was let loose in Mercedes race winning 2019 contender.

On duty for the German team, the Briton took full advantage, completing 101 laps on his way to posting the best time of the day, indeed the first in-season test.

Of course, with no sign of the rain that compromised yesterday's running, no five hour stoppage, and almost ideal track conditions, Russell, like his colleagues was able to rack up the mileage and as a result yesterday's best, posted by Max Verstappen, was always going to be under threat.

As it happened, other than Russell, only Sergio Perez and Sebastian Vettel went quicker than yesterday's best, as the 16 drivers on duty racked up 1,319 laps - 4,435 miles between them, compared to the 668 laps (2,246 miles) completed yesterday.

Having driven the Williams on Tuesday, when his best time was a 1:33.682, today Russell was able to really stretch his legs, his best time in the Mercedes 4.653s quicker.

On duty this afternoon for Racing Point, Sergio Perez looked set to leave Bahrain as pace-setter until Russell eclipsed his time in the final hour.

Prior to Perez' 1:29.005, Sebastian Vettel was the pace-setter, the German posting his best in the morning. Though he missed out on posting the best time, Vettel was one of seven drivers to complete over 100 laps, Alexander Albon completing 143 in the Toro Rosso.

Dan Ticktum was the second busiest driver, the Briton completing 135 laps in the Red Bull as the Austrian team, like a number of its rivals, seeks to understand where it lost pace at the weekend.

Once again, Mick Schumacher was the centre of the media's attention as he switched from the Ferrari to Alfa Romeo. Interestingly, though he 'only' completed 70 laps today, his best time - which was good enough for sixth - was only 0.022s off his best in the Ferrari yesterday.

While Daniil Kvyat continued tyre testing for Pirelli, so too Carlos Sainz was on duty for the Italian manufacturer this morning before handing over to Fernando Alonso this afternoon. At which point, to make up for the lost time yesterday, Sainz took over from Lando Norris in the other McLaren.

"Timings don't mean a lot in testing," admitted Russell, "however, it's always a special experience to be on top of the timesheets.

"We had a very productive day, the team learned a lot of things to help them progress. Driving a different car than usual, I personally also learned a lot which I can take back to further improve my driving."

"It's been great to have George back in our car for the day and many thanks to Williams for allowing it," said Andrew Shovlin. "He did an excellent job today, the way he goes about testing and his consistency and feedback would make you think he has a couple of seasons of F1 under his belt, not just two races.

"The morning has been successful, we had a packed programme due to the rain yesterday but were getting through the items very well. Unfortunately, at lunch we spotted a small water leak that wasn't a quick fix which delayed our afternoon programme quite considerably.

"Whilst we couldn't complete all our test items, we've done the important bits and we leave here with more information and understanding of the car and tyres and we've managed to test some developments that we plan to roll out over the next few races."

"Over the last couple of days we have gradually worked our way through a comprehensive job list," said Racing Point's performance engineering director, Tom McCullough.

"The rain yesterday deprived us of track time, but we still managed to collect valuable aero data in the morning with various instrumentation fitted to the RP19. We continued the aero programme today with Lance before moving our focus to performance and tyre work.

"Track conditions have been much better today - without the sandy and rainy conditions we experienced on Tuesday - and we made the most of the afternoon to run four different tyre compounds with Sergio.

"We rounded off the test with a series of long runs. The timing of this test has been useful because it's given us the opportunity to get a better understanding of the new parts we introduced over the last two events and we will put that learning to good use in China."

At Ferrari, Sebastian Vettel was back at the wheel two days on from Sunday's race and completed a total of 103 laps, 47 in the morning and 56 after lunch. The German got through the planned programme with the team working on set-up and car balance. Before the lunch break, he did several short runs under 10 laps, to assess the handling of the car in different configurations.

In the afternoon, he did some race simulation work, so as to analyse in depth the behaviour of the tyres. His fastest lap was a 1:29.319, set in the morning, good enough for third position on the time sheets.

Now, Ferrari sets its sights on China, which hosts the third Grand Prix of the season next week. This race will also be the one thousandth in the history of Formula 1, the first dating back to the race at Silverstone on 13 May 1950. Ferrari has taken part in more of those races than any other team.

"Today we made the most of the time available thanks to good and consistent track conditions," said Vettel. "We were able to try various set-up configurations and evaluate the behaviour of the tyres.

"I'd say it was a pretty positive day: in the morning, we concentrated on some short runs, while in the afternoon, we simulated various phases of a race. It was an interesting session, because we managed to gather even more information which could be useful in the upcoming Chinese Grand Prix."

Lando Norris drove the McLaren until late afternoon, undertaking aero research on low and high fuel runs plus replicating procedures normally carried out over a grand prix weekend, with Carlos Sainz taking over for the final 70 minutes. Meanwhile Sainz drove the Pirelli car until Fernando Alonso took it over shortly before 13:30hrs, the Spanish duo continuing 2020 tyre evaluation and development.

"No rain in the desert meant we could enjoy a normal day of testing," said Sainz. "In the morning, I completed a good programme to test the Pirelli compounds. I switched to the McLaren test car in the afternoon for the last hour of the test and completed part of the runs I missed yesterday due to the rain.

"In general, I would say this has been a productive and positive test for us. We've managed to gather valuable data to analyse back at the factory. Now it's a couple of days to recharge batteries and we'll be back for the Chinese Grand Prix next week.

"All in all it's been a positive test and as a team, a lot of data has been gathered from Carlos, Fernando and I," added Norris. "Today was very constructive with me getting through our scheduled run plan and recording a good number of laps.

"Hopefully we can put to good use what we've learned over the past two days so that we can maximise our performance in the coming races."

"It was positive being back in the car over the past two days," said Alonso. "Hopefully I've been able to help the team and Pirelli with its tyre development, managing almost 70 laps each day.

"It's always nice to be active in a Formula 1 car and experience the evolution of the car and tyres. So everything has been positive and I'm happy."

"Quite a productive day and this time we were able to complete everything that we had scheduled without too much trouble," said Gil de Ferran. "222 laps in total today, which says it all and underlines that story.

"Hopefully we'll take the learnings from the last two days forward. Overall, our trip to Bahrain has been a very good one. On to China..."

"We had a very productive second test day," said Alexander Albon. "We ran some more aero tests and learned more about the behaviour of the tyres.

"We found some interesting things during the test and there were definitely some positives to take away," he added. "I'm sure we'll be applying the results to what we learned in Bahrain later on in the season. Everything ran smoothly today, I got more mileage under my belt and I'm feeling better with the car - it was a very busy programme, but it felt good to end the day completing the most laps overall."

"After a slightly frustrating day yesterday, today has been a much more productive session," said Jonathan Eddolls, the Faenza outfit's chief race engineer. "Alex remained in the test car and we planned to compress effectively one and a half days of testing into a single day!

"As it is quite typical, we started the morning completing some aero rake running to gather on track aerodynamic flow structures to compare back to the wind tunnel and CFD runs. The remainder of the morning was focused on mechanical setup work, aero optimisation, and tyre understanding across six new sets of the C3 compound - the qualifying compound from the race weekend.

"Although there was some wind, it was significantly less than the race weekend which made the testing much more consistent, however, this meant it was hard to find solutions to improve the balance from the weekend.

"The focus of the afternoon was on tyre behaviour of the harder compounds over longer runs and how we can influence that with setup items. We closed the day with a number of shorter runs on the softer compounds to help gather tyre data and understanding for future events.

"Daniil continued the Pirelli test, learning about potential 2020 tyres. The car has been faultless again today and we were able to complete 774km with Alex (more than a whole race weekend) and 601km with Dany without any issues, which has been a credit to the drivers and the entire team. We now have a lot of data to analyse in the coming days with the aim of improving our performance from China onwards."

"Once again today, we supplied PUs for three cars," said Masamitsu Motohashi, Honda F1 Deputy Technical Director, "one each for Red Bull and Toro Rosso and a further one for the Pirelli tyre test.

"A generally trouble-free day meant we were able to make up for the time lost yesterday, with all our cars going past the 100 lap mark by the end.

"Once again, our PU programme was aimed at optimising settings for the coming races and the results were satisfactory. The work we have done over these two days and the feedback we have received will be put to immediate use as we prepare for next week's third round of the Championship in China."

Check out our Wednesday gallery from Bahrain, here.