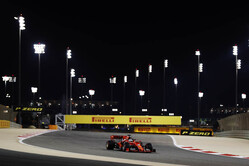 Degradation is reasonably high here as anticipated, especially on the soft compound.

The track characteristics are somewhat different to the first race in Australia: here it's all about traction and managing the rear tyres - which are nonetheless holding up well.

Once again, the cars are quicker than the equivalent free practice sessions last year.

Despite the most aggressive asphalt of the entire season, the tyres performed with no issues at all, including blistering or graining.

Track temperatures have been variable today as always in Bahrain: around 20 degrees lower in FP2 than FP1. Generally, temperatures are slightly cooler than last year.

Mario Isola: "No surprises from the first day of action here in Bahrain, which represents quite a different challenge compared to Australia, and as a result we're also seeing a slightly different competitive order so far. We're happy with the tyres, which are performing exactly how we wanted them to: there's about a second between each compound up to now, and this means that it's probably going to be quite difficult to qualify on the medium compound tomorrow during Q2, which determines the starting tyre for the grid. Last year we saw a mix of strategies in the race, and the early signs so far suggest that we could see the same again in 2019."