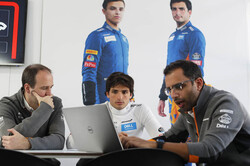 The irony surely will not be lost on McLaren that at a time Honda is celebrating its first podium since 2008 and is targeting its first win, the Woking outfit's engine issues continue.

Following his retirement just nine laps into the Australian Grand Prix, thereby making him the first retirement of the season, it has been revealed that Carlos Sainz has been forced to take a new MGU-K for this weekend's race in Bahrain.

Asked if the Melbourne unit was beyond repair, the Spaniard confirmed this to be the case.

"Hopefully they have been looking at it for the past few days and they have found out," he said, "hopefully, the cause of the issue so we can put some solutions in place for this race.

"If they work or not we will wait and see," he continued, "but it is true we have had a couple of failures during testing so it is a weak point of the car and we need to keep working on it to make sure we don't throw any more points because we threw a couple of them away in Australia."

Other than that however, Sainz appears happy.

"I think the car has no weaknesses apart from the basic ones, compared to the top teams," he said. "The power unit is strong in a straight line and we've done our steps forward, so I welcome that, but Lap 11 of race one is not good enough."