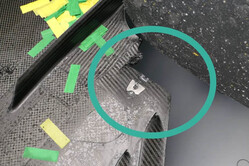 In Mercedes first Pure Pitwall video of the season, chief strategist James Vowles admits that Lewis Hamilton did a "fantastic job" in fending off Max Verstappen in the closing stages of Sunday's Australian Grand Prix as the full extent of his car's damage is revealed.

"On inspection of Lewis' car after the race, we noticed some damage on what we call the tyre seal area," reveals Vowles. "We saw the broken carbon just in front of the rear tyre on that floor region.

"That area is quite sensitive aerodynamically," he continues, "both for downforce and also for balance of the car, and we believe we sustained it during the race while riding over some kerbs.

"Lewis already had a very long stint on the medium tyre after covering off the threat from Vettel's undercut, so he was already having to manage those tyres quite significantly, hindering his progress through the race.

"Furthermore, the floor damage wouldn't have helped. It would have caused the rear to be more unstable that it normally would be, and he did a fantastic job bringing that car to the end of the race."

In terms of Hamilton's pit stop, which came just 15 laps into the race - one lap after Vettel - while teammate Valtteri Bottas didn't pit until lap 23, Vowles explains: "In free-air, Vettel was very, very fast. They (Ferrari) successfully covered any undercut risk from Verstappen but were also starting to come into Lewis' window very, very quickly.

"Indeed, his out-lap was already quite a bit faster than Lewis already and the medium compound had a warm-up slope. What that means is it's quite difficult for the first few sequences of corners, but into the second lap of driving on it, it becomes faster and faster.

"So there was a severe and genuine risk that Vettel would be in Lewis' window," he admits. "We opted to make sure we covered that off by stopping Lewis and giving him enough time on track to deal with the warm-up and understand what he could do in terms of management to absorb that gap to Vettel."