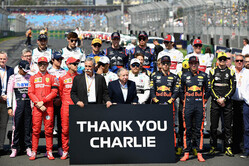 Despite the numerous 'thank you Charlie' stickers on the cars yesterday, and the drivers gathering with race, FIA and F1 officials for a minute's silence, surely the most poignant tribute to Charlie Whiting was that from his former boss, Bernie Ecclestone.

Ecclestone, with whom Whiting worked at Brabham in the 80s, first as chief mechanic and then chief engineer, and was subsequently found a role with the FIA by his former boss, spoke warmly of his friend while dabbing tears from his eyes.

"Nobody really knew what Charlie was or what he did," he told Sky Sports. "He did so many things, and nobody really knew... and they'd be surprised if they knew the things he did do.

"I convinced the FIA to take him, because they didn't have anyone like him," admitted Ecclestone.

Though he has been involved in the sport for many decades, and seen countless drivers killed, Ecclestone admitted that the death of his close friend has hit him hardest.

"I've had this happen to me, because I've been very close to a lot of drivers that we lost in the 70s," he told Sky Sports.

"Those sorts of people I was very close to... I was more upset about Charlie," he admitted. "Because with drivers it's like there's an expectance something will happen but it's happened so many times, it's not such a big shock. But when it's somebody that's normal... that's when it's all different.

"A warm, nice person," he continued, "doesn't want to get into a fight, he's strong when he wants to do something, but he does it in a nice way.

"He's been there from the beginning, he had a good apprenticeship, Formula One would have been different if Charlie hadn't have been there. For sure."

While the sport's owners have had to take on a whole team of people to carry out the tasks he once managed single-handed, speaking in a previous interview, Ecclestone admitted that, similarly, it will be difficult to replace Whiting.

"I think the word is impossible, more or less," he said. "He'd seen it, heard it and done it all.

"He did it as a one-man job," he continued. "It's finding this person who can do what Charlie did. If you've got three or four people doing what he did, it just doesn't work."