F1 should use midfield battle as template for 2021 urges Tost 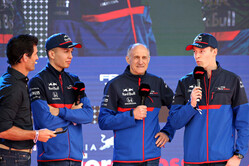 As ever, our front page poll in which we ask readers who they think will win the forthcoming race, includes drivers from just three teams, Mercedes, Ferrari and Red Bull.

To be on the safe side, and avoid accusations of bias, we include the obligatory 'other' option, but let's face it, last season Sergio Perez was the only driver for a team other than the big three to even make it to the lowest step on the podium.

Behind the big three, this season's battle for 'best of the rest' is likely to be as frantic and unforgiving as ever, with Renault and Haas certain to be under attack from Racing Point, Alfa Romeo, McLaren and Toro Rosso.

Indeed, as said powers that be ponder the post-2020 rules and financial arrangements, Toro Rosso boss, Franz Tost, believes the sport should be looking to the midfield battle as its template for the sport moving forwards.

"It is difficult and this is where Liberty Media has to go," he said, according to Motorsport.com. "We all have around $140 to $150 million," he continues, the top teams are far away, but this is not good for the sport, it doesn't help us.

"They don't expect that the difference this year will be as big as it was in the past, I think that we will be closer to the first three teams. But nevertheless they will stay in front, because the development during the year is decisive. They have the money to develop, and if they need $300 million for development, they get $300 million. If they need $400 million, they have $400 million.

"For us, it's not possible," he admits. "We have to calculate our development steps, and then we can say 'OK, can we afford it or not?'.

"Alfa did a fantastic job," he said, referring to the pre-season tests, "Haas is very fast, Force India, as we know, is always fast, Renault is good. That means this midfield is really, really tight. But I hope that we are in a position to beat many of them."