Bottas reports back for duty at Mercedes 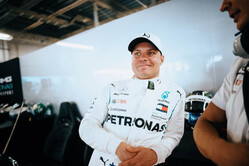 Despite the team orders that ended his hopes in Sochi, and compromised a couple of other races, it is understandable that Valtteri Bottas described 2018 as his "worst season ever".

Despite having the same equipment as teammate Lewis Hamilton, who scored 11 victories and 11 poles on his way to securing his fifth title, the Finn failed to win a single race and started from pole on just two occasions. Pipped by Max Verstappen in the final race of the season, the 2011 GP3 champion finished 5th in the overall standings.

Though he has a new one-year deal with Mercedes, the Finn is aware that he must raise his game significantly this season, what with Esteban Ocon and Gorge Russell waiting in the wings.

Sporting a beard and looking nicely refreshed, the Finn reported for duty at Brackley yesterday.

"It was a really good break; went to Finland to see Santa Claus," he joked. "I went to South America, Chile, Argentina, for a good holiday, a good disconnect from Formula 1 so (I'm) fully recharged for the new year.

"It's good to be back here," he added. "Everything is still as (it was when) I was here last time in December. Everyone's working hard for the new car, it's nice to see the progress we've been making.

"It's all pretty cool stuff, and top secret stuff that I'm not going to share but it's always an exciting time of the year seeing the thing coming together with the new car.

"The holidays are over, we're all working for the new year hard and I look forward to 2019 and what it brings... I have good feelings."

Next week sees Bottas contest the opening round of the Finnish Rally Championship when he competes in the Arctic Lapland Rally, he will drive an M-Sport Ford Fiesta WRC with two-time World Rally champion Timo Rautiainen as his co-driver.