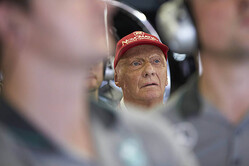 Austrian media reports that Niki Lauda has returned to hospital five months after his lung transplant.

The three-time world champion, and non-executive chairman of the Mercedes F1 team, was released from hospital in late October, following his lung transplant which took place in August, and subsequently headed to his home in Ibiza for Christmas.

However, the Austrian publication Oesterreich, reports that the F1 legend has been readmitted to the Vienna AKH, where he underwent the transplant, after developing flu over the holidays.

"There was an influenza case in his family, and he is treated to an intensive care unit with us," spokeswoman for the AKH, Karin Fehringer, told the Oesterreich.

Due to his previous surgery, his immune system remains weak which leaves him open to further infections.

While there was severe cause for concern initially, it is understood that it has now eased and Lauda (69) should be released from hospital later this week.

The Austrian was taken ill just after New Year's day and as there were no specialists in Ibiza, following one night in a private clinic he was transferred to the Vienna AKH.