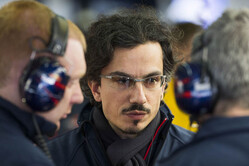 In March, just months after Renault's controversial recruitment of the FIA's technical chief Marcin Budkowski, Ferrari revealed that it had secured the services of Mekies.

Unable to begin work until September, though Ferrari had initially said that Mekies would report to Technical Director, Mattia Binotto, team boss Maurizio Arrivabene has confirmed that the Frenchman is the team's new Sporting Director, a role last held by Massimo Rivola in 2016.

"Laurent is perfectly matched in all the strengths that are requested in a sporting director," Arrivabene told reporters. "That is the reason why we hired him, this is the reason why he's going to take this for next year."

Mekies, who is attending a race as a Ferrari employee for the first time, first entered F1 in 2001 with Arrows, subsequently headed to Minardi where he was race engineer to Mark Webber, Justin Wilson, Zsolt Baumgartner and Christijan Albers between 2002 and 2005, before being promoted to the role of chief engineer in 2006 when the Faenza outfit was purchased by Toro Rosso.

Between 2013 and 2014 he was head of vehicle performance at Toro Rosso before joining the FIA as Safety Director in 2015. In 2017 he was appointed Deputy Race Director, though he continued in his role as Safety Director and was heavily involved in the development of the Halo device.