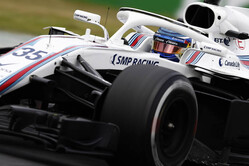 Sergey Sirotkin finished 16th and Lance Stroll 18th in the Brazilian Grand Prix. Both cars started the race on the soft compound Pirelli tyre, with Sergey 14th and Lance 19th on the grid. Sergey made his first and only pitstop for the medium tyre on Lap 16. Lance pitted a lap later, again for the medium tyre and made his second and final stop on lap 65 for the supersoft tyre.

Paddy Lowe, Chief Technical Officer: It was a frustrating race with lots of blue flags. We took a gamble with our strategy, stopping early to get both cars onto the prime tyre in an attempt to undercut the cars we were racing. Unfortunately, this didn't pay off due to the degradation of the prime tyre and both cars progressively lost positions. These aren't the results we were hoping for today, however both drivers drove well, within the limits of the car, and performed the necessary tyre management.

Sergey Sirotkin: Straight away from the beginning, it was a very difficult race. We were missing the pace of the cars around us. It was tricky during the first laps, I felt like I was dancing on ice, not just to fight but even to keep the car on track. I was trying to protect the positions and it ruined the rhythm, so it took a while to settle down. We never really had the pace to recover so all race it was about survival. It was very difficult to manage and keep everything under control for such a long stint, so very disappointed after a tricky race.

Lance Stroll: It was a long, hard race. I had a good start and then I was just getting out of the way for blue flags and managing tyres, but ultimately that wasn't good enough as we were too slow. That is the nature of the track also, as it is very tight and there are not many corners, so it is tough to get out of the way. It was far from the most exciting race. The bottom line is we were not quick enough, and I am not sure we could have done anything with our strategy.