Vettel: Singapore was the turning point 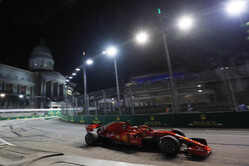 Over the course of the season, Sebastian Vettel has been involved in a number of costly mistakes, and on Sunday he finally paid the price, watching on helplessly as rival Lewis Hamilton secured his fifth title.

However, while many point to Hockenheim as the point it all began to unravel for the German, who famously slid off a wet track and into the barriers while leading, Vettel insists that it was actually Singapore that was the turning point.

"I think, yeah, from Singapore onwards we just didn't have the pace to keep up with Mercedes for a couple of races and then obviously some other things happened on top that didn't help and we couldn't score the points due to mistakes that we did, mistakes that I did," he admitted.

Though going into the Singapore weekend as favourite, Vettel qualified behind Hamilton and Verstappen on a track notorious for its lack of overtaking opportunities.

The Singapore weekend also marked the introduction of a series of much-anticipated upgrades, which subsequently proved to impede performance and were eventually removed.

"I can't be too hard on myself with what happened in Germany," he continued, "because it's not like... I've done much bigger mistakes this year but obviously it was the most costly one.

"Unfortunately it's part of racing: when you push you might be sometimes pushing a little bit too hard. I chose the wrong corner as well.

"But anyway, it's behind me and I'm not really thinking about that too much. I consider it part of racing and it happens to others as well.

"But yeah, seeing that struggled in the last couple of weeks, just for pace and speed was probably more defining than that."