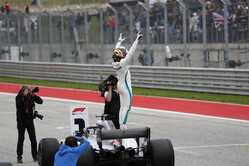 Lewis claimed his 81st Formula One pole position - his ninth of the 2018 season and fourth at the United States Grand Prix, equalling Michael Schumacher's pole record in the USA. Valtteri will start tomorrow's United States Grand Prix from P3 on the grid. Both drivers will start the race on the SuperSoft compound tyre. Today's result marks the 99th pole position for Mercedes in Formula One.

Lewis Hamilton: I'm so happy, this is a great result. We knew that it was going to be extremely close today and that we would have to give it everything. Q1 and Q2 were fairly straightforward. Once we got to Q3, we made sure that we got out on the track at the right time to have a good window and not be stuck in traffic. My first lap in Q3 was good, but it was really close between us all. I think I was ahead by less than a tenth and I knew the others would improve as well, so there was no room for error. There have been some Q3s in past races where I had to bail out on the second run, so I was very strict on myself and I told myself "Today, you have to pull through on that second lap", which is exactly what I did. The team has done a really great job this weekend so far, the approach for us has been very sturdy and we're not getting ahead of ourselves. We knew that it was going to be close this weekend and that we have to put in the same work, effort and diligence as before - and that's exactly what we will continue to do.

Valtteri Bottas: It was a pretty straightforward qualifying session all the way until the second run in Q3. Everyone else improved much more on their second run, but I could not find more grip. You want the tyre pressures and temperatures to be in the optimum window for those qualifying laps. The first run in Q3 felt a little better, so we will have to look at the data and see if we managed to get the tyres into their optimum window for the second run as well. P3 is not a bad position to start from though and my main focus will be to get past Kimi because we want to get the maximum number of points for the team. Both Lewis and I will be on the SuperSoft and Kimi between us will be on the Ultras, so that should be interesting for the start. I think every team will go into Sunday with a number of question marks since we couldn't do any proper long runs, so we have only limited information on the tyres. I'm really looking forward to tomorrow to find out what's going to happen.

Toto Wolff: That was a really intense qualifying session - but this is the kind of battle that the sport should be all about. In recent days, everybody has been talking down Ferrari and talking us up, but we knew those extremes wouldn't be reflected in reality. Ferrari have had incredible straight line speed so far this weekend and they carried that through into qualifying, where we expected to have a very tough fight on our hands. And that's how it proved, with Lewis pulling out that something extra to find pole in the car today. We're happy to be on the first two rows with both Lewis and Valtteri - but we will have a tyre disadvantage to Kimi at the start, and we will need a good first lap to hold position. Tomorrow is not about the world championship, it is about trying to maximise the potential of our package and deliver the best performance we can. And hopefully that can take us another step closer to our goal.

James Allison: We had a pretty reasonable idea after third practice that qualifying would be a squeaky affair and so it proved. Our hearts were in our mouths on that final lap and indeed through the entire session, with the cars very closely matched and Vettel actually ahead of Lewis on the final run until the last corner of his last lap. We are, of course, delighted to be on pole for tomorrow and to have Valtteri lined up right behind Lewis on row two. However, we have a tough Grand Prix ahead of us and, when the three top teams ran high fuel this morning, we were all very evenly matched. Tyre management will be key in the race and the car and driver that look after their rubber best will prosper; we hope that we have done enough for that to be us.