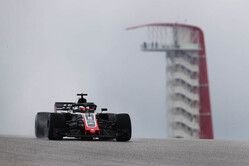 The 18th round of the 2018 FIA Formula One World Championship began with practice Friday at Circuit of the Americas (COTA) in Austin, Texas, as teams prepared for the United States Grand Prix Sunday.

Two 90-minute sessions - FP1 and FP2 - on the 5.513-kilometer (3.426-mile), 20-turn track were run under cool, cloudy and raw conditions, with Haas F1 Team drivers Romain Grosjean and Kevin Magnussen logging some wet laps on the only purpose-built Formula One venue in the United States.

Both drivers began FP1 on the Pirelli Cinturato Blue full wet tire for their installation laps before transitioning to the Green intermediate tire. While the track dried out some as the session wore on, it remained wet enough that running slicks was never an option.

Grosjean ran 10 laps and earned the eighth-quickest time on his final tour with a lap of 1:50.821. Magnussen completed 15 laps and recorded the 16th-fastest time with a 1:51.614 on his 10th lap. Grosjean was relatively happy with his racecar and the amount of grip available, while Magnussen dealt with some understeer on his Haas VF-18.

Rain picked up in the lead up to FP2 and continued into the session, making it a washout for Haas F1 Team as neither Grosjean nor Magnussen turned a lap.

Romain Grosjean: "It was frustrating to not get out there and run. We want to run a bit more in front of our fans here. There's nothing we can do about the weather, but there's a lot we can do about getting more tires. This morning, at least, went pretty well. I was happy with the car balance, especially on the intermediates. It looks like qualifying tomorrow is going to be wet, so we saved tires. We'll probably go and have a feel in FP3. Let's see tomorrow what we can go and get."

Kevin Magnussen: "It's obviously not been ideal today with the weather, but that's how it is. It's out of our control. We tried to make the best of it with some running in FP1. We just didn't have the tires to run in FP2. I feel sorry for everyone that was watching. Hopefully, it will be different tomorrow."

Guenther Steiner: "FP1 was pretty useful. We were able to learn on the wet and the intermediate tires, and that's where we've been a little bit behind because the opportunity to test is rare. The afternoon was boring because we couldn't go out there in case we compromise our tires for tomorrow. We decided to stay in. At least we have the full choice of tires for Saturday."