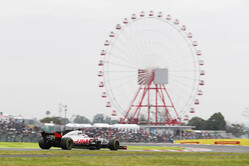 The 17th round of the 2018 FIA Formula One World Championship began with practice Friday at Suzuka Circuit as teams prepared for the Japanese Grand Prix Sunday.

Two 90-minute sessions - FP1 and FP2 - on the 5.807-kilometer (3.608-mile), 18-turn track were run under cloudy conditions, with Haas F1 Team drivers Romain Grosjean and Kevin Magnussen logging laps on one of Formula One's most venerated venues since it joined the calendar in 1987.

Both drivers began FP1 on the Pirelli P Zero Yellow soft tire before transitioning to the Red supersoft. Grosjean's quick time of 1:30.814 came on his 11th lap shod on supersofts. He ran 22 laps and was the eighth-fastest driver. Magnussen's best time was a 1:31.274 on his 13th lap, also set on supersofts. He ran 28 laps and posted the 14th-quickest time. Understeer was experienced by both drivers, with a lack of grip impacting Magnussen especially.

Speeds picked up and lap times dropped in FP2. Grosjean wrapped FP2 as the eighth-quickest driver with a time of 1:30.440, which was .374 of a second better than his best lap in FP1. His quick time came on the 10th of his 32 laps on a set of supersoft tires. Magnussen shaved .318 of a second off his FP1 time with a lap of 1:30.956 despite being just 16th fastest. His quick lap came on his ninth tour, also while utilizing the supersoft tire. He completed 25 laps.

The two drivers ran slightly different programs in FP2, with Grosjean beginning the session on White medium tires before switching to supersofts. Magnussen mimicked his FP1 session by starting on Yellow softs before returning to supersofts. Both continued to fight understeer, with Magnussen's plight being made worse by his inability to get a clean lap, as traffic thwarted his efforts to put an entire lap together.

Romain Grosjean: "It's been a good day. It's great that we got a lot of running in the dry - we were not expecting it. When we came in this morning, we thought that FP1 might be dry but FP2 would be wet. I think the weather's getting better for tomorrow, as well. It's such an amazing track to drive. You want to get as many laps as you can, so I'm very happy with that. The car seems to be working pretty well, on low fuel and high fuel. We have a few bits and pieces to adapt for tomorrow to make sure we get a bit of extra performance but, generally, I'm happy with the day."

Kevin Magnussen: "It's been a happy birthday. I've been driving a Formula One car around Suzuka. It's been a decent day. We have some stuff to look at overnight. I think the car is up there. Force India looks a bit fast, but we'll see how we go tomorrow. It's very close in the midfield, but I haven't really had any good laps in today. That's often the case on Friday. Romain got some good laps and showed what the maximum is in the car - probably not quite as fast as the Force Indias, but up there, definitely. The balance isn't perfect, but the grip is pretty good. That's why we have some stuff to look at tonight to try and fine tune the details. Hopefully, we'll find a little bit of time tomorrow."

Guenther Steiner: "It was a good day of testing here at Suzuka. We completed our run program with both cars, and we hope it continues to stay dry for FP3 tomorrow. Overall, I think we're in good shape. I'm looking forward to qualifying tomorrow afternoon."