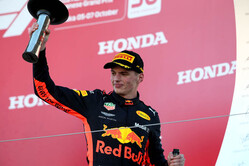 Max Verstappen: "After the penalty and incident with Seb I'm really happy to come away with another podium in Japan. The car felt good and we were able to compete at the front for the entire race, which at this track makes it even better. Judging by a few mistakes he made it looked like Bottas was pushing hard on the last few laps. It's hard to follow anyway so I just did my best hoping he would make another fault and I could be in a position to take advantage. I felt a little hard done by with the penalty I got while defending against Kimi. I was trying my best to get back onto the track as quickly as possible instead of just cutting the corner, perhaps next time I will just cut the track. The incident with Sebastian was a very similar mistake to mine in China earlier this year, I think he could have passed easier if he had waited. It shows that even the most experienced drivers can make errors when under pressure. I'm now very excited to get to Austin, we have good performance and it's a great place to visit."

Daniel Ricciardo: "Surprisingly, I was able to come through the field and overtake quite easily. That's not because I thought I couldn't personally overtake, it's just not that easy on this track, but I was able to make good use of the downforce we had on the soft tyre. I knew we would be quite vulnerable on the straights as we ran very high downforce this weekend, but I could stay close enough in the corners that I could latch onto the tow of the cars ahead on the straights. It was a good set-up and the first part of the race was a lot of fun. We went on to the mediums to try and cover Kimi and fourth place was kind of written after that. I would have loved a podium and I was kinda of hoping for something to happen up front, but I feel I earned at least a fourth today. It was good to come through the field and on the grid Helmut actually said that he thought fourth place was a little optimistic and possibly out of reach today. So, fourth is like a little victory from the back on this track and it was good to see our strong pace against Ferrari. A podium would have been even sweeter but I can't complain with the result and I'm pleased for the Team. All that's left to say is, arigatooooo Japan."

Christian Horner, Team Principal: "Today was a good day for both drivers and the Team. For Max to achieve a podium despite incurring a five second penalty following contact with Kimi on the opening lap was a great performance. He had a busy afternoon, with a racing incident between him and Seb on lap seven resulting in damage. Despite that, he was still able to close down Valtteri in the final stages and put him under pressure to try and claim second place and secure his third consecutive Suzuka podium. Daniel also drove a very strong Grand Prix, progressing through the field with some great overtakes and with strong pace he was able to finish fourth from fifteenth on the grid. All round, it has been a positive day getting two cars to the finish and taking home a good haul of points for the Team."