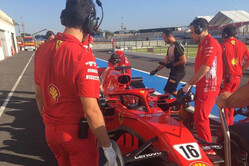 Just nine days after being confirmed as a Ferrari driver for 2019, Charles Leclerc was in action for the Scuderia at Paul Ricard.

The youngster completed 129 laps in the SF-71H, the first time he has driven the car, as part of Pirelli's 2019 tyre evaluation programme.

In action for Ferrari for the first time since being announced as Sebastian Vettel's teammate, Leclerc shared the track with Valtteri Bottas who was on duty for Mercedes.

While both teams have previously carried out wet testing for Pirelli as part of its 2019 evaluation programme, Ferrari at Fiorano and Mercedes at Paul Ricard, this was both teams' experience of the slicks.

Testing continues for both teams tomorrow, with Bottas remaining in the Mercedes and Sebastian Vettel taking over from Leclerc, after which the remaining tests are at Suzuka (Oct 9 and 10) with Renault and Mexico City (Oct 30) when Sauber is on duty.

As in 2017, the post-season test in Abu Dhabi will see all the teams running Pirelli's 2019 compounds.