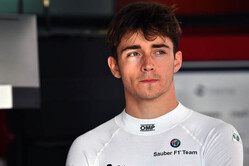 Speaking to reporters in Singapore, Ferrari team boss Maurizio Arrivabene, having clarified that it was he - and not "Homer Simpson" - who ultimately made the decision to drop Kimi Raikkonen in favour of Charles Leclerc, admitted that he and the team see the Monegasque youngster as a long-term prospect.

"When you make choices like this, that are related to the driver, you don't only have to make a short-term commitment but a long-term one," said the Italian. "We are not only looking ahead to next year, we are looking into the future, that being the future of the team.

"This was a decision taken by me," he confirmed, "discussed with the top management and taking into consideration many, many factors. It has nothing to do with the respect I have for Kimi as both a human being and as a driver.

"If you have to make a choice about the future of the team then I think we made the right one for us and for Kimi, who we appreciate for everything he has done for us and wish him the best for the future."

Aware that while he is currently the media darling but that things will change, particularly in Italy, once he lines up on the grid for the Scuderia, Arrivabene insisted that Ferrari will not be expecting too much from Leclerc, the youngest driver to race for the team in F1 since 1961, in the early stages of his Maranello career.

"The first mistake would be to put much too much pressure on the shoulders of this guy," said the Italian, "that could be potentially a huge mistake.

"Charles signed his first contract at the Ferrari academy in November 2015. In that contract, we designed a future for him in Formula One, making sure we made adjustments at the academy to ensure drivers would eventually make the step up. All the other teams are doing this so its good for Formula One to be taking these steps to build towards the future."

Referring to the team's young driver academy, the Ferrari boss couldn't help but mention some of the anomalies of the 2019 grid.

"We change a bit the way that we organise the Ferrari Drive Academy," he said, "but also how we are going to develop the talent for the future. Charles is not a big surprise, he's one of the talented drivers that we have in Formula 1.

"Thank God, it's a guy that he grew up with us and I hope that he is going to continue his career with us, at least until 2022 for sure.

"Having said so, if you look at the overall situation in the paddock, it's an important sign that all the talent they are giving to Formula... look at Mercedes. They make a choice a couple of years ago with Bottas, a young driver, nearby a champion like Hamilton. This guy of McLaren for next year: they have Carlos Sainz with a guy that is considered a rookie. Next year Sauber have Kimi with Mr question mark and if you look at Red Bull they were brave enough to have Verstappen nearby Gasly. There is nothing strange in all of this but I think the good signal to Formula 1 is that we are striving to look for, to create the future champions."