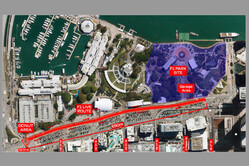 While there remains a question mark against the proposal to run a Formula One Grand Prix on the streets of Miami - another possible spanner thrown into the works this week with the revelation that the Mayor of Miami has cancelled a fact-finding mission to the Singapore Grand Prix - locals will get a taste of the sport when cars take to the streets of the city in October.

The F1 Miami Festival, which it is claimed will be similar to the events held in London last year and Marseilles ahead of this year's French Grand Prix, is set for 17 October as part of a four-day 'fan festival'.

The Independent reveals that a planned demonstration event, which will feature cars from a number of - as yet unidentified - teams, will see cars head down a 690m stretch of Biscayne Boulevard at the end of which will be a spot ear-marked for the obligatory donuts. .

Though all the teams will be present for the event, not all of them will take part in the demonstration runs, while the 'fan festival' will feature a line-up of supercars, a stage and giant screens showing the race in Texas along with a garage located in the hotly-debated Bayfront Park, the focus of much of the opposition to the Grand Prix.

"We are having a festival in Miami and we are finalising all of the details. We don't have the details yet but, like Marseille, there is a car run," confirmed an F1 spokesman.

However, like the Grand Prix, the 'fan festival' and demonstration runs have incurred the wrath of local businesses and residents.

Last week Itai Benosh, Treasurer of the Biscayne Condominium Association, wrote to Miami City Commissioner Ken Russell asking "was there any approval of this event by the City Commission? Can anyone just decide to close Biscayne Blvd for a high-speed race? Under what authority is the city allowing it?"

While the route still requires approval from the Florida Department of Transportation and the Port Miami local authority, it is thought that this is merely a formality with interested parties hoping that the event will whet the appetite for a full-on Grand Prix in 2020.

"It is the screening of a race on a big screen, and a mini race on Biscayne Blvd. and it will close the park for about three weeks. The purpose is obviously to gain support from residents," says Andres Althabe, president of the Biscayne Neighborhoods Association (BNA), who reveals that he will be meeting the Mayor of Miami later this month to discuss the plans for the Grand Prix.

"I have seen no evidence that Formula One or the local promoters had discontinued the effort to get a contract signed. Even if they are planning a first race only in 2020, they will need to have a signed contract very soon," says Benosh.

In many ways, the Miami demonstration run is vital for F1's owners, Liberty Media, who see the Miami Grand Prix as a cornerstone in their plan for the sport's future.

Yet to announce any significant new sponsors, far less confirm a new race, much depends on F1 gaining a better foothold in Liberty's own backyard.

Indeed, such is the company's determination to take F1 on to the streets of Miami, it is looking to scrap the usual demand for a hosting fee and co-promote the event itself in partnership with Stephen Ross, owner of the Miami Dolphins.