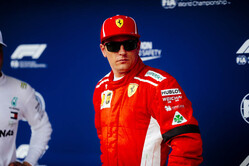 The lottery of a wet qualifying session resulted in Scuderia Ferrari drivers, Kimi Raikkonen and Sebastian Vettel, taking 3rd and 4th place on the grid respectively. Conditions were tricky throughout the session as rain was falling with variable intensity and some sections of the track were flooded, while you could see semi-dry patches in others, so the call for tyres was always difficult in the first two segments, while the third one saw the Extreme Wet compound being the only sensible choice. The SF71Hs could not capitalize on the performance advantage that had been apparent in the dry P3 session, but both drives are determined to do their best in tomorrow's 70 lap race, for which dry and particularly hot conditions are currently forecast.

Kimi Raikkonen: "Overall this weekend the car has been really good in any conditions. In qualifying it was a bit tricky, but I enjoyed driving it a lot. The speed was there and the car was working well in wet conditions. Today we were more competitive in the rain than we had been in other places; It was nice, I was pleased because this hadn't been our strongest point lately. In Q3 with used tires we were fastest of all, but with the new set we were a bit unlucky with the traffic; we got stuck a bit behind another car and with all the spray we could not have a clear lap. There was nothing we could do, as we were limited on time. It's a pity because there was a lot of grip on the new tires: I'm sure we had the speed and everything else to get the first place, but we have to be positively happy that now we can actually challenge for the front in wet conditions".

Sebastian Vettel: "I don't think it was an awful session overall, we were just not quick enough. Conditions were tricky and it was hard to squeeze everything out of the car, but I think my laps were generally fine. In wet conditions, we weren't so confident as we had been in the dry, so we have some work to do. Today it was not a straightforward session, but I think we managed it well until the end. Obviously, we were missing a bit of something, but that's how it is. We'll see what tomorrow brings: the start is important, but the race is 70 laps long and I think we'll be fine. I'll move off from the second row, so we'll focus on what we need to do starting from there. However, we have a good car no matter the conditions, and that's the main thing".