Charles Leclerc's First Monaco Grand Prix - What Can We Expect? 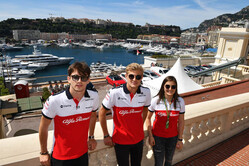 Charles Leclerc has the opportunity to be a part of history when he becomes the first driver from Monaco to appear in his home Grand Prix since Olivier Beretta in 1994. Leclerc takes the wheel for Alfa Romeo Sauber in this week's race in Monte Carlo after having already picked up 9 points this season, to sit in 13th place in the Drivers' Championship.

There has been a great deal of excitement about the 20-year-old's debut F1 season and his first appearance on the famed Circuit de Monaco street circuit, although the odds would appear to be stacked against his being on the podium at the conclusion of Sunday's race. The leading bookmakers have Leclerc at a price of 2500-1 on winning the race, a long way behind Sebastien Vettel (Ferrari) at 15-8 and championship leader Lewis Hamilton (Mercedes) at 5-2 (source: Playright.co.uk)

Nevertheless, expectations about the youngster's future success in Formula 1 are high. He has, in the eyes of many observers, been the stand out rookie of the season thus far, having gained points for Sauber in con-secutive races for the first time since 2015, after finishing a career-best sixth in Azerbaijan followed by 10th place in Spain.

Leclerc is no doubt well aware of the weight of expectation on his young shoulders, but everything he has achieved in his career to date would suggest that he is more than able to cope. His sixth place in trying conditions in Azerbaijan (where he won in Formula 2 in 2017) showed real maturity, in particular the way he maneuvered his way through the field from 13th on the starting grid in a display that was superior to that of his many of his rivals who have vastly more experience. It was an even better drive when it is taken into account that it was achieved in a car which, according to Sebastian Vettel, isn't fast enough to be competitive. 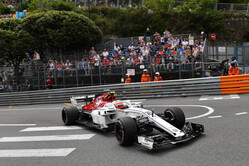 There is no doubt that Leclerc has the pedigree to become world champion one day in the not-too-distant future. Success in karting (including being French champion in 2009), Formula Renault and Formula 3 (he won the GP3 Series in 2016), was followed by a dominant performance throughout the 2017 FIA Formula 2 series (which he won by a massive 72 points), and so he knows what it takes to win.

Plenty of people within the industry hold a similarly optimistic view of his future, with experienced heads around the Sauber team certain that, given the right car, Leclerc has what it takes to be world champion.

However, despite the fact that the majority of the Monegasque at Sunday's race will be cheering Leclerc on, the real race will be the battle between Hamilton and Vettel, currently first and second respectively in this year's Drivers' Championship.

After Hamilton's Mercedes proved too quick for Vettel and Ferrari in Spain, all eyes are on the Italian team in Monte Carlo to see if they can improve in the sixth race of season and make some headway in closing the 27 point gap that has opened up at the top of the Constructors' Championship.

Hamilton currently leads the Drivers' Championship by 17 points from Vettel, even though he would be the first to admit that he has not been at his best in some of the earlier races in the season. Likewise, despite having won two out of five races in 2018, Vettel and Ferrari cannot be happy with their overall performance thus far, although bad luck has certainly played some part in their run of results.

Nevertheless, this weekend's race is crucial for Vettel if Hamilton and Mercedes are not to open up too big a lead before the series of European races, where the reigning world champion traditionally performs at his best.

At the same time, Red Bull cannot be discounted in Monaco. Max Verstappen and Daniel Ricciardo have recorded the fastest two practice times to date, some way ahead of both Hamilton and Vettel, and a win for either the Belgian or the Australian would come as no great surprise (they are currently at odds of 5-1 and 9-2 respectively).