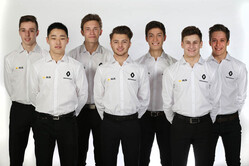 Each driver will enjoy an extensive programme where racing is just one element. Physical and mental training, media and marketing support, engineering and learning the core values of the proud history of Renault in motorsport constitute the programme away from the track, with many elements taught at Renault Sport Formula One Team's Enstone base.

For their racing, Max, Christian, Arthur and Victor will all go wheel-to-wheel in the Formula Renault Eurocup, competing on nine Grand Prix circuits, including the streets of Monaco.

Sacha will contest the European Formula 3 Championship and Sun will race in the British Formula 3 series, while Jack, runner-up in the GP3 Series last season, will make the step up to Formula 2 this year.

"This is the third year of the Renault Sport Academy and our most exciting driver line-up yet," said Mia Sharizman, Director of the Renault Sport Academy. "Jack, Max and Christian enjoyed very successful 2017 seasons as part of the Academy whilst Sun has shown his potential. Sacha, Arthur and Victor join us for their first year in the Academy and we are very much looking forward to watching their progress.

"Each driver has a very exacting set of targets so they know precisely what they have to achieve. We hope to be able to celebrate many successes from Academy members over the course of the year ahead."