FP2 a washout as only five drivers post times 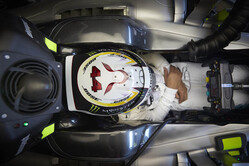 Ahead of today's second session, the air temperature is 15 degrees C, while the track temperature is 18 degrees. The rain that threatened throughout FP! Has finally arrived and it is now - to use a technical terms - bucketing down.

Indeed, such are the conditions, the start of the session is delayed indefinitely.

Sebastian Vettel was quickest in this morning's session, which saw the top four - Vettel, Hamilton, Ricciardo and Raikkonen - covered by just 0.472.

While the rain didn't cause any interruptions earlier, a heavy crash for Sainz did, the Spaniard hitting the barriers after dipping a wheel on the wet Astroturf as he exited the Hairpin.

The Safety Car makes a couple of exploratory trips but it is clear conditions are nowhere near safe enough. "It's too dangerous to send the cars out in these conditions," insists Christian Horner.

Such are the conditions, even the Safety Car is aquaplaning. Indeed, before the fabulous Mercedes completes a lap Race Control is already announcing when the next investigation will take place.

"Bernd Maylander says rain is worse than it was at the start of the session," confirms Pirelli.

At 14:37 Race Control confirms that the session will get underway at 14:45 leaving 45 minutes of running. However, as the rain continues to fall it remains to be seen whether the teams will want to risk running their cars and drivers.

14:45 arrives and passes, and there is no rush to head out. Indeed, in the Red Bull garage while Verstappen chats, Ricciardo's car is up on its stand and the Australian nowhere to be seen.

Finally we have a car on track, and it is The Iceman, Kimi Raikkonen. Naturally, he is on full wets.

As the Ferrari heads back into the pitlane after its installation lap, Hulkenberg heads out. The German is subsequently joined by teammate Palmer.

Ericsson heads out also, but it is now raining a little more heavily again.

Vettel and then Perez head out, but like their predecessors they complete one lap before seeking the comfort of the garage.

We tell a lie, Perez remains out on track. "There are some rivers on the straight," warns teammate Ocon, who subsequently has a very hairy moment.

Perez posts the first time of the afternoon (51.345) with his teammate posting 49.518 moments later.

At which point Hamilton heads out, followed by Massa.

As Hamilton splashes his way around a very soggy Suzuka, Bottas, who is not even in his car, watches his progress on the monitors.

Hamilton crosses the line at 48.719 to go quickest by 0.799s. Moments later Massa is the fourth driver to post a time, the Williams veteran stopping the clock at 52.146.

Meanwhile, Stroll runs wide in T1 after aquaplaning on one of the rivers that runs across the pit straight, but courtesy of the generous run-off is able to continue and avoid the barriers.

Sainz is back on track, his crew having rebuilt his Toro Rosso following his FP1 crash.

With 10:50 remaining, Vandoorne heads out, the Belgian having the track all to himself.

Just when it seemed we weren't going to get any more running, Hamilton heads out again. A number of teams, including Haas and Renault, have already called it a day.

Alonso is also on track. However, at the end of his lap he is told that the team has all the data it needs and he can pit... as does Hamilton.

We assume that's game over.

Indeed it is, the session ends with just five names on the board, Hamilton leading the way ahead of the Pink Panthers and Williams duo.