Wolff: It's entirely in our hands 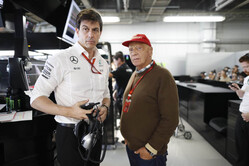 Listening to some of the comments from Mercedes over the last 48 hours, especially Lewis Hamilton, one would imagine that the German team is fearing the worst not only in the remaining five races but into next season, as Ferrari and now Red Bull continue to make progress – the Italian outfit's ability to constantly shoot itself in the foot aside.

Speaking ahead of this weekend's Japanese Grand Prix, Toto Wolff has eased up on the usual underdog rhetoric, slightly, though admitting that his team faces a tough battle in the weeks ahead.

"In sport, it's in the tough times that you really see the strength of a team," he said. "Our championships in the past three years have come because we have never taken success for granted and, even in the good times, we were able to put our finger in the wound and work on our weaknesses. After Malaysia, we have found ourselves doing the same: analysing our problems, beginning to understand their causes and working on solutions.

"However, this is not the work of a moment," he insists. "While we work to improve in those areas, we must not forget the many strengths we have shown this season. Our car has taken more pole positions and race wins than any other and we lead both championships - thanks both to the strength of our own performances and, in part, the misfortune of our rivals. But every point counts, no matter how they come to us.

"Lewis has made the most of every opportunity in recent weeks; he has been in fantastic form, particularly since the summer break, and is driving with a perfect balance of aggression right now. It has been a more challenging picture for Valtteri and it is a priority for us to give him the car he needs to perform - and to help him extract everything from it. It is not an easy time right now but this is the time for his strength of character, work ethic and natural talent to shine through.

"The next challenge comes in the form of Suzuka, a circuit which will ask very different questions of our car than Sepang. In the last years, we have performed very strongly there. But recent weeks have reminded us that historic form counts for little with these 2017 cars and tyres. It is a circuit which rewards Grand Prix cars and drivers performing at their very best - and we expect a very close fight between ourselves, Ferrari and Red Bull.

"As a team, our targets for the final quarter of the season are very clear. It is entirely in our hands to make sure we achieve them."