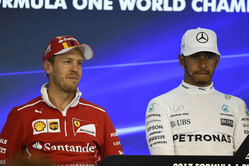 As Lewis Hamilton claimed that his car is longer the best out there, one was minded of Toto Wolff's wearisome mantra, that his team is now the underdog.

Yet, though the history books will show a lights to flag win for Lewis Hamilton on Sunday, the fact is that Sebastian Vettel was able to push him all the way.

Thankfully, for Hamilton's sake, the Briton made a storming start, the Mercedes still has that extra grunt - as witnessed at the re-start, and the aero rules are still crap, meaning that even with the equally crappy DRS, drivers can follow for lap after lap but are unable to put a serious move together.

Hamilton is fully aware that Sunday was a prime example of the battle he faces over the coming eight races if he is to claim his fourth title this year.

"People talk about our car being the best, that we have the fastest car, but I think it's very difficult for anyone to truly say that because there are pros and cons between two cars and areas where we are faster and they are faster," he told reporters. "And it seems to vary from race to race."

"I hope we have more to come and we need more to come in order to win this thing," he admitted. "We might not be the quickest everywhere ahead and I'm trying to figure out in my mind how to apply positive energy to my guys to bring some more magic in these next eight races so that we can win.

"It's going to take everything from every single one of us to finish these next eight races and come out on top. Which is how a championship should be."

"The positive thing is that we had very good race pace," he said. "Overall the car was very good.

"We didn't change too much compared to Silverstone, which shows on the one hand that Silverstone was just a bad weekend, but we improved, especially on race pace. I mean we were, on average, a second off, or nearly a second off in Silverstone, so it's a big step. I'm very, very happy. I think we are on the right track and I don't think we have a circuit we should fear, going from now."