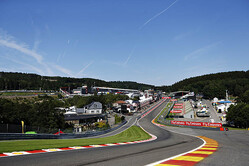 Ahead of this year's Belgian Grand Prix, a number of changes have been made to the Spa-Francorchamps circuit, mainly in respect of the higher lap speeds being achieved under the new rules.

The guardrail on the right between Turns 8 and 9 has been replaced with a wall, while the kerb on the apex of Turn 15 has been extended as far as the asphalt section on the right after the corner, a drain has also been installed in front of this kerb.

Tyre choices are soft, supersoft and ultrasoft, a step softer than in 2016 when Nico Rosberg won on a two-stop strategy that saw him start the race on softs before two stints on mediums.

While Friday is expected to be overcast, rain is expected on Saturday and Sunday, with heavy rain anticipated throughout the race.