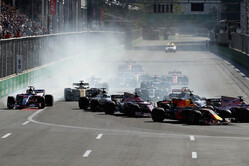 While the record books will show Max Verstappen topping the timesheets in both sessions, with Daniel Ricciardo not far behind. A couple of technical issues for the youngster and an early Q3 crash for his teammate, lave us wondering whether all the promise at the start of the weekend will come to nought.

In many ways, this track should suit the RBR13, and though there is now a huge question mark over the duo, a strategic gamble, not to mention the mistakes of others, could turn things around.

Though we expected Ferrari to shine, this has not been the case thus far, and in many ways the Italian team's hopes this afternoon very much depend on a strong start. The fact that Kimi Raikkonen out-qualified Sebastian Vettel is an indicator of just how mixed up things have been this weekend - not that this is any reflection on the Finn.

Not the strongest in terms of pit strategy, Ferrari will need good starts and the need to get those tyres up to temperature as soon as possible, one of the Maranello outfit's strengths this season.

While Montreal thankfully ended Toto Wolff's continued cries of being the underdog, nobody expected Mercedes to be strong here. Indeed, Friday's form suggested another Sochi or Monaco, certanily as far as Lewis Hamilton was concerned.

However, it all came together yesterday, and that blistering pole-winning lap was clear proof that the Silver Arrows can take its second successive win here. And should Hamilton have an issue, teammate Bottas' form suggests he is more than ready to step into the breach.

Describing his attitude on his pole lap as "being greedy", Hamilton also admitted that it was "do or die", which suggests the Briton is aware just how important it was and that perhaps we shouldn't write off Ferrari just yet.

Indeed, Vettel's claim that he wasn't particularly bothered by the difference in pace between his red car and the Silver Arrows is one we believe, after all there are no championship points for pole.

Behind these we have the Force India duo, and even if the front runners head off into the distance at the start we can expect some entertainment from the Pink Panthers as Sergio Perez attempt to keep his precocious young teammate in his place and the Frenchman seeks to repay the compliment for Montreal.

Fresh from his points finish in Canada, not to mention his private test in Austin, Lance Stroll will be keen to keep the momentum going, the youngster having out-qualified his vastly experienced teammate, Felipe Massa, for the first time.

However, despite all the talk of improvements, and the lessons learned in COTA, we cannot help but feel that when the lights go out and the red-mist appears in his visor, young Lance might revert to (pre-Canada) type.

An out of position Ricciardo, is going to find himself in amongst the absolute madness of the midfield pack at the start of proceedings, and at this track, in particular that's going to be fun.

While last year's race witnessed four DNFs and none of the anticipated mayhem, the new regulations, the track surface and tyre choices have seen a significant increase in the number of incident this year, and other than the incidents involving Ricciardo, Perez and Palmer, one needs look further than the F2 events to see what can happen if over-enthusiasm gets the better of you.

Indeed, such was the doom and gloom ahead of last year's race, one felt the drivers were somewhat over-cautious. Now, twelve months later, having upped the pace, a few drivers have seen what all the fuss was about and it comes as no surprise to hear a few of them begin to voice their fears again... as Perez, Palmer and Ricciardo can tell you, much like Monaco, when you fail to give due respect the Baku City Circuit will bite straight back at you.

As if the thought of the Toro Rossos, Haas' and Renaults wasn't enough, we have Pascal Wehrlein starting from 14th, and let's not forget those two Papaya cars starting from the very back.

According to Pirelli a one-stop supersoft-soft race makes the most sense but admits timing will be influenced by degradation rates. The quickest strategy is to start on supersofts for 12 laps (for high degradation) or 22 laps (for lower degradation), then softs to the flag.

As the cars make their way to the grid, the air temperature is 27 degrees C, while the track temperature is 48 degrees. However, as we are approaching 17:00 (local time) it will soon begin to cool.

All are starting on the supersofts, bar Grosjean, Ericsson and Vandoorne who start on the softs.

All get away for the warm-up lap, though Alonso appears to leave it very late.

They're away... into T1 Hamilton and Bottas hold their positions, while Vettel tries to go down the inside of his Ferrari teammate, the two almost collecting one another, while further back Kvyat runs wide. The Russian rejoins the track alongside his teammate who momentarily appears to lose control and spins, losing a heap of positions in the process.

Further round the lap, Bottas tangles with Raikkonen after hitting the kerb on the inside at T3, the Mercedes throws up a shower of sparks and as Raikkonen accuses his countryman of hitting him and causing a puncture it appears the Mercedes is damaged also.

At the end of lap 1, it's: Hamilton, Vettel, Perez, Verstappen, Raikkonen, Massa, Ocon, Stroll, Ricciardo and Hulkenberg. Bottas slowly makes his way back to the pits.

Back in the pits, Bottas takes on a new nose as the Stewards reveal they are investigating the Toro Rosso clash and also the clash of the Finns.

Verstappen reports damage to his radiator, the team tells him he may have debris in it. Despite this, lap 3 sees the Red Bull driver go quickest (47.580).

At the back the McLarens are battling the Saubers, neither Vandoorne or Alonso in any mood to hang around.

Hamilton asks what happened to Bottas, he is told about the nose change.

Raikkonen reports that the rear of his car doesn't feel good following the clash with Bottas.

Ericsson complains that he has no battery.

Ricciardo pits at the end of lap 5, as does Vandoorne. The Australian rejoins in 17th on the softs while the Belgian takes on supers.

No further investigation necessary in terms of the Toro Rosso tangle. However, the Finnish fracas will be investigated. Moments later, the Stewards declare "no further action warranted".

"Debris is clear," Ricciardo is told, after his pit stop, "you are free to race." He subsequently makes short work of Wehrlein to take 15th.

Palmer's race looks to be over, the Briton slows and is told to "switch off, switch off". Nonetheless, he makes it back to the pits. He had previously reported smoke at the back of the car.

Hamilton and Vettel trade fastest sectors as the Briton maintains a 3.4s lead.

Alonso makes a nice move on Ericsson to take 12th.

Ricciardo is hunting down Sainz who is on the tail of Ericsson.