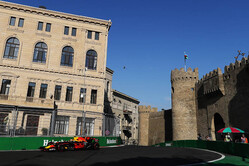 Max Verstappen headed a Red Bull 1-2 in the opening session, but it should be pointed out that both drivers were on the supersoft, while third placed Sebastian Vettel was on softs.

Nonetheless, it's while since the two Red Bulls topped the timesheets.

Mercedes looked good as did Force India, until Sergio Perez had a disagreement with the wall at T8 leaving his car badly damaged on its right side.

The smooth nature of the track surface, not to mention an unusual amount of dust, saw almost all the drivers take advantage of the escape roads at one point or another, some - we're talking Romain Grosjean - appearing to spend more time off the track than on it.

While it is now 17:00 (local time) the air temperature in only slightly down on this morning, though the track temperature is around 9 degrees lower. With Sunday's race - and qualifying - taking place at the same time, conditions for this session are more representative than earlier.

The lights go green and Palmer and Magnussen lead the way. As more drivers head out, all are on the softs.

Sterling work by the Force India crew means that Perez is ready to go out any time soon.

True to form, Grosjean is off - read down the escape road - at T3, while Palmer locks-up at T2. "I have no efficiency with the brakes," claims Grosjean.

Raikkonen complains that his tyres are cold, the Finn subsequently running wide in T15.

As Verstappen improves to 44.288, Grosjean is at it again. "When I hit the brakes the bite is not there," he warns.

Vettel off at T1, Sainz T4 and Kvyat at T15. While the other two soon get going again, the Russian is unable to escape from the cul-de-sac, his attempt at a three-point turn a miserable failure.

In the meantime, Verstappen continues to improve, the Red Bull driver now down to 43.988.

"It's ridiculous, ridiculous," wails Grosjean, the Frenchman subsequently heading back to the pits.

As more and more cars go off, Verstappen provides some insight; "the car is changing from lap to lap," he reveals.

Replay shows Ocon have a very close encounter with the wall but somehow getting away with it.

"It's a pain in the arse, this ******* front locking," complains Kvyat. "Keep your head down, we are looking at it," the Russian is told, before being advised that he's not the only one encountering such issues.

Despite his issues, Kvyat is first to make the switch to the supersofts, with Bottas being the second. Meanwhile, Massa is on the hards.

In the Haas garage, Grosjean is having his front brake material changed.

Bottas, on the supers, improves to fourth (44.309), ahead of Ocon, Hamilton and Raikkonen.

Just after being told he is "over pushing", Kvyat gives the barrier a whack at T15 which appears to cause damage to the Pirelli hoarding rather than his car. Indeed, the VSC is deployed as the hoarding debris is removed from the track.

Verstappen switches to the supers as Hamilton goes off at T2. Moments later Vettel makes the same mistake.

On the supersofts, Raikkonen posts 43.723 to take the top spot from Verstappen who has only marginally improved on the softer rubber.

As Vettel goes off at T2 (again) Grosjean is back complaining (again).

Vettel goes off at T8, however to further compound the madness of this track, so too does Massa, meaning that the German has to wait until the Brazilian has rejoined the track before he can get back to work.

Elsewhere, Hamilton is odd at T15, which means another yellow flag which means further frustration for all concerned.

In quick succession, Verstappen is off at T1, while Palmer has hit the wall at T8.