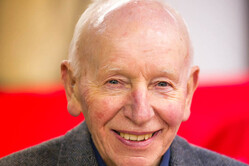 For four years Rob Widdows and I ran 'Track Torque' an hour-long weekly motor racing programme on Radio Victory. It was only a local station, but we had just about everybody on. At the end of four years someone asked us who was our favourite guest and we both said, simultaneously and without prior discussion, 'John Surtees'.

Before his first of several appearances, we had been a tad anxious because John had a fearsome reputation. It was said that he was notoriously sensitive, took offence easily, and he was hard on anyone who gave less than 100%. The guy I knew was modest, generous and witty and had that rare knack of making you feel like the most important person in his world.

John was born to a motorcycle racing family and began by being passenger to his Dad on a motorcycle combination. He undertook an apprenticeship with Vincent motorcycles and began his racing career on a Vincent. He won more than 250 races on 'bikes. His tally in Grand Prix racing was 38 wins from 51 starts, a win from start rate of 74.5%. He won six Tourist Trophies and was the first rider to win three successive Senior TTs,

Some writers of his obituaries have had a problem with relating then to now. Riders then competed in more than one class. Every top rider competed in the Tourist Trophy and a win in the TT, in any class, had, and has, unrivalled prestige.

Some may point out that John's best days came with MV Agusta, the class of the field, but that was not the case when Surtees joined the team. He might have stayed with Norton, with whom he won his first 500cc championship in 1956, but Norton's plans, hindered by finances, did not impress him.

John was on his way to his fourth and fifth motorcycle World Championships in 1959 when Tony Vandervell offered to dust off one of his Vanwall cars for him to try. Vandervell had officially retired on doctor's orders, but found it hard to give up and hired Goodwood for three days.

MV Agusta provided John with superb machines, but his contract was restrictive, though it did not exclude cars. Vandervell's gesture was remarkable, he ran a three day test and expected nothing in return.

At the end of the first day John phoned Stirling Moss and asked him how he took the Fordwater kink. 'Flat out, old boy,' came the answer.

At the end of the second day, John phoned again, 'You said that Fordwater was flat.' 'Good God,' said Moss, 'you didn't'...' Five hundred yards of spinning remains the record at Goodwood. It was a story John told himself.

In March 1960 John sat in a Ken Tyrrell-entered Cooper-Austin at the start of Goodwood's first Formula Junior race and it was the first car race he had ever seen. He diced for the lead with Jim Clark, making his debut for Team Lotus, and finished a close second.

Behind the scenes there were moves to ensure John got the right licence for his second race, a Formula Two event at Oulton Park where his Cooper came second to the works Lotus 18 of Innes Ireland and the new Lotus was in a different class.

His fourth race was for Lotus, in the Formula One International Trophy at Silverstone, in a car initially earmarked for Clark. The Chapman/Clark partnership has become motor racing legend, but Chapman actually wanted Surtees.

That first season was spasmodic because John was also busily winning the 350cc and 500cc World Championships for MV Agusta.

In his first season, Surtees raced in four Grands Prix. He came second to Jack Brabham at Silverstone and set pole and led in Portugal, his third Grand Prix.

At the end of the year Surtees chose four wheels though he had no shortage of offers, including Ferrari and Lotus. John, however, decided that he had a lot to learn about cars and so signed with Reg Parnell's private team which ran Coopers.

Parnell had been one of the star drivers of British racing and had been Aston Martin's team manager so Surtees reckoned that would be a good place in which to learn his craft. 1961 was the first year of the 1,500cc formula and while Ferrari had a new V6 engine, the Brits ran with Coventry Climax 'fours'. The Cooper T53 was outstanding with a big engine, but uncompetitive with the smaller version so John spent the year in mid-field and ended the season with two fifth places in the World Championship.

Even so he could scare the opposition with his sideways driving which often seemed likely to end in a shunt. In fact he had supreme car control, it was just better than most drivers could imagine. It was a rare occasion when Surtees lost a car.

At the 1962 Belgian GP, Surtees set pole in his Parnell-run Lola and he came into the pits complaining that the chassis was flexing. Since he was still a new boy they dismissed him until a mechanic jacked up a wheel and the other three did not move. Surtees had unusual mechanical empathy and that incident began a relationship with Eric Broadley of Lola which endured though Can-Am racing and Honda in F1.

He was the last former motorcyclist to win a Grand Prix in cars though such stars as Ascari, Lang, Fagioli, Nuvolari, Rosemeyer and Varzi all started on 'bikes. No former motorcycle ace has ever made the transition. Giacomo Agostini failed though Johnny Cecotto did reach F1.

Mike Hailwood is numbered among the greatest of 'bike racers and he drove for Surtees in F1 and F2. He won the 1972 F2 Championship in a Surtees TS10 beating, among others, Niki Lauda and James Hunt. In Formula One, Hailwood scored points for Surtees and even came second at Monza in 1972.

I once asked John why Mike did not do better in cars. You asked him a straight question and received a straight answer. He said that Hailwood lacked mechanical empathy.

That was something John had in trumps since he served his apprenticeship at Vincent motorcycles. When he went to Ferrari in 1963, he was signed alongside Mike Parkes since both men were engineers as well as drivers. John's 1964 World Championship for Ferrari owed a lot to his technical input to the team.

Niki Lauda and Michael Schumacher were both to shake up the Scuderia, but neither did so to the same extent as Surtees. John designed the cars he built, initially with the assistance of a couple of junior draughtsman. No driver, except in the pioneering days pre-WWI, has contributed so much to the design of his own cars.

John won the World Championship for Ferrari in 1964, the only man to win titles on two wheels and four, but Ferrari did not continue to progress so a second and two thirds were all he had to show until a failure in the front suspension of his Lola T70 caused him to crash heavily. It was a life threatening shunt, perhaps more serious than many thought because he needed a lengthy spell in hospital in 1978 to have remedial surgery.

Nineteen sixty six saw the new 3-litre Formula One and Ferrari was the best prepared. Surtees set pole and won in Belgium and then abruptly left Ferrari. It was a decision which probably lost both parties world titles in 1966 and possibly in 1967 as well.

There had been conflict with Eugenio Dragoni, Ferrari's rather imperious team manager, before but the crunch came when he omitted John from the driver line-up for Le Mans saying that he felt Surtees had not yet fully recovered from his accident, even though he had just won at Spa. John went to see Enzo and the result was that he stormed out.

He quickly got a drive with Cooper which was running cumbersome Maserati-Engines cars and John won the final race of the F1 season to finish second in the championship to Jack Brabham. He also won the inaugural Can-Am Championship. He was still a top driver but one in search of a drive. Ferrari was out and he did not want to drive for Colin Chapman.

Honda beckoned and not only was there a motorcycle connection, but Honda had won the last GP of the 1.5-litre era. The Honda RA 273 was overweight, but John worked with Lola to create the RA 300 and with it he won the Italian GP, the last of his five World Championship wins. The 1968 replacement, the RA 301, also developed with Lola suffered mechanical reliability, though it stayed together for Surtees to finish second in France.

There is an irony in that Honda had prepared the air-cooled V8 RA302 for its debut in France, but John refused to race it since he considered it too dangerous. Jo Schlesser was recruited and on the second lap, he crashed and was immolated in the resulting fire. A second RA302 was prepared, but Surtees refused to drive it and that led to Honda's withdrawal.

There followed a season with BRM which is best forgotten, then John bought the McLaren M7C to run as a privateer while preparing his own cars. Early in 1972 he hung up his helmet and that year saw the highlights of Team Surtees, Mike Hailwood coming second in the Italian GP and winning the European Formula Two Championship.

John was a man of fierce integrity who had problems raising sponsorship at a time when that might well mean back-handers and money laundering. He gave up the struggle at the end of 1978 just when Bernie was bringing television money to the sport.

In later years he was involved in the promotion of motor sport on a personal level, often with his collection of classic motorcycles and cars. He restored machines of both types whose engineering he admired.

When he was with Ferrari, he was offered a pair of 250 GTOs at two thousand dollars apiece. He turned down the offer because, unlike collectors, he did not rate the 250 GTO but, unlike them, he had raced them in their pomp and at a level that they could not imagine. He was adamant that he did not regret the opportunity.

John was heaped with honours in his final years, including an honorary doctorate in 2015 and a CBE in 2016, though it should have been a knighthood. He suffered personal tragedy in 2009 when his son, Henry, was killed in a racing accident. John's reaction was to establish the Henry Surtees Foundation which aims to help people overcome accidents and to encourage young people to fulfil their potential.

John Surtees was both a great driver and a great man. When he raced at Monza he used to have to hide until everyone had gone home because the Italian crowd adored Il Grande Giovanni who had delivered seven World Championships to Italy. When the cars used to circulate on their assembly lap for the British GP, the crowd reserved its loudest cheer for Surtees.

I was once a schoolteacher who happened to live near Goodwood. One day, after school, I dropped by the circuit and John was conducting an F1 test. John saw me standing in the pitlane and, in between clicking his stopwatch, he engaged me in conversation. I was just an anonymous fan who was showing an interest and he was not too grand to notice that. I walked on air for a week.