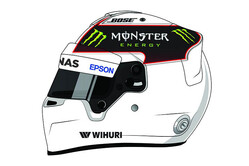 Three-time world champion Lewis Hamilton has invited fans to design the helmet livery he will sport throughout the 2017 F1 season.

Asking fans if they want to design his helmet for the upcoming F1 season on Twitter, the three-time world champion reveals that he will "meet the winner personally at one of the tracks to present them with the prize of a full-size signed replica".

"I'm on the look out for a dope new layout that evolves my current theme and features the candy apple red in my existing design," he adds. "I'll be picking the design that I feel is the most stylish, inspiring, iconic and eye-catching."

Fans are directed to download a pdf template of the Briton's helmet and then post their ideas on Instagram, tagging @LewisHamilton and using the hashtag #LH44Design

In the past drivers have been known to invite fans to design liveries for one-off races, but this is the first time a driver would sport a fan-based helmet livery for an entire season.

Having previously used an Ayrton Senna inspired livery, in the last couple of years Hamilton has moved away from the Brazilian's mainly yellow livery to a mainly white design.