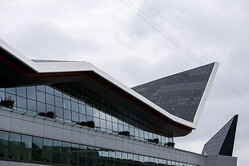 Despite the failure of the Jaguar Land Rover deal due to Porsche's veto over rival manufacturers' use of the track, Silverstone is still eyeing "other car manufacturers" to come to its rescue.

It's no secret that Silverstone, the home of the British Grand Prix, is not exactly awash with cash. However, the big question is who it can turn to for help. Jaguar Land Rover (JLR) pulled out of talks to buy a lease on Silverstone last year but an article in the Telegraph by Christian Sylt reveals that the track's owners are now in talks with other manufacturers.

Silverstone is owned by the British Racing Drivers Club (BRDC), a group of 850 racing enthusiasts including past and present F1 champions such as Nigel Mansell and Lewis Hamilton. They don't fund Silverstone and it is the only one of F1's 20 race hosts which doesn't get any government support.

This means it has to largely use revenue from ticket sales alone to cover the running costs of the British Grand Prix and pay the £18m annual hosting fee to the F1 Group. It has driven up the red ink for the BRDC and over the five years to 2016 it made combined net losses of £47.6m.

As the BRDC's financial position became more precarious F1's boss Bernie Ecclestone allowed it to pay the British Grand Prix hosting fee after the event rather than beforehand as is common with other races. This makes it easier for the BRDC to pay the fee as it can be sure that once the race has taken place it will have received all the revenue from it and perhaps some advanced ticket sales for the following year. The downside is that the BRDC has built up around £18m of arrears which are owed to the F1 Group.

The BRDC's problems raced into the minds of its members on 12 February last year when its chairman John Grant sent a letter to them saying "we have no cash reserves to fund future development of the circuit." It was no exaggeration as an article in the Telegraph, written by Sylt, revealed that in 2015 the BRDC's cash in the bank reversed by £638,000 to just £9,000. It was lower than in any other year over the past decade and has steadily declined from its peak of £21.1m in 2008.

Ironically the low-point came as the British Grand Prix hit an all-time attendance record with 140,000 fans flocking to see home hero Lewis Hamilton take victory in 2015. Although Hamilton was on a roll again last year attendance fell by 1,000 and earlier this month the Telegraph reported that it had taken its toll on the BRDC's subsidiary Silverstone Circuits Limited (SCL).

In a letter sent to BRDC members last month Grant said that "the GP, although an excellent sporting spectacle with a hugely popular British winner (thanks Lewis), fell short of budget and the previous year in terms of revenues, reducing SCL's full year profit by over £2 million. In all other respects, the business has done well, and our full year forecast has trended up over the last several months. As we enter the time of year when cash traditionally is tight, we are positioned relatively comfortably."

An investigation by Sylt and ITV revealed that the BRDC is also considering dropping the British Grand Prix to reduce the risk of burning up further losses. It needs to give two years of notice and the earliest it can do so is in July when this year's race takes place. This means that the race is guaranteed until at least 2019 but it remains at risk after that.

Although the formal decision will not come until July a recent report by Sylt in The Sun quoted a senior source close to the BRDC who said that the board has already made up its mind about dropping the race. The BRDC has denied this and said that as the official decision is not due until July it could still go either way. It doesn't deny that there is no guarantee the British Grand Prix will continue beyond 2019 and is at work on other ways to keep Silverstone ticking over.

For the past few years the BRDC has been in talks about selling a 249-year lease on the track. The aim was to put Silverstone in the hands of a wealthy owner which would secure the future of the track. In turn, the proceeds from the sale would pay off the British Grand Prix hosting fee arrears so the race would also be secured.

The most likely buyer appeared to be JLR which wanted to use Silverstone as a high speed test track for its customers. The BRDC board entered into exclusive talks with JLR and in April last year asked members to vote on giving it the power to sell. The BRDC board won the vote but then all went quiet for months and in August we got an insight as to why.

Writing in the Telegraph, Sylt revealed that Porsche, which operates a driving centre at Silverstone, has a veto over rival manufacturers from using the track for more than 45 days each year. Unsurprisingly this put the brakes on JLR's bid and it dropped out of the running. It wasn't the only departure as Silverstone even lost its managing director Patrick Allen who left in the summer. Sylt revealed all this and ominously it came from the same source who recently said that the BRDC board has made its mind up about dropping the British Grand Prix.

It seems hard to understand why the BRDC board asked the members to vote on the sale before getting the matter of the Porsche veto cleared up. Surely it would have been more logical for the BRDC to have put Porsche and JLR in contact with each other at the outset and asked them to wrangle it out before the members voted?

The BRDC board could have urged both sides to come to an agreement as it was in everyone's interests. JLR wanted to buy the lease on Silverstone, the BRDC wanted JLR to buy it to secure Silverstone's future and Porsche didn't want Silverstone to be in jeopardy as it has a driving centre there. If they had come to agreement it would have smoothed the way for the sale and the vote would have been the final hurdle. If the parties hadn't been able to clear the obstacle then nothing would have been lost.

Similarly, it is well known that before the Bahrain Grand Prix held its first race in 2004 Ecclestone shook hands with the organisers to give them exclusivity in the Middle East. When the authorities in Abu Dhabi approached Ecclestone a few years later about hosting a race his first move was to put them in touch with the race organisers in Bahrain to see if they would agree to it. They did and the rest is history.

The same happened a few years ago when a group in Qatar contacted Ecclestone about hosting a race there. This time Bahrain didn't agree to it so the race didn't get off the grid. Crucially, Ecclestone didn't waste any time or effort of negotiations over a race which was stuck at the red light.

In contrast, the BRDC members took a vote on a sale before the preferred bidder had cleared a significant hurdle. Surprisingly, the BRDC board is still motoring down this road.

Sylt's latest report for the Telegraph reveals further details from Grant's letter last month which said that "one of the useful by-products of our discussions with JLR is that we have been approached by a number of other car manufacturers who see the benefits of being able to bring customers to Silverstone to sample their wares in a prestigious and exciting but secure environment, or to use our facilities for major dealer or vehicle launch events. We have a number of interesting ideas to meet their requirements, including possible 'brand centres' with dedicated track access, and see this as another area of potentially attractive business opportunity."

There is no suggestion that these other manufacturers are looking to buy a lease on Silverstone and if they are prepared to work within the restrictions of the agreement with Porsche then the discussions may well come off. Hopefully this is a question which will be asked sooner rather than later.