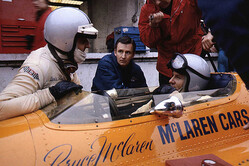 Fans of a certain age will come over all dewy-eyed at the memory of certain liveries.

Be it the 7-Up of the Jordan, the iconic red and white of the Marlboro McLarens, the fabulous black and gold of the (original) Lotus, the Yardley colours that adorned the McLaren and BRM, numerous tobacco liveries and of course the Gulf orange of the late 60s/early 1970s McLaren F1, Indy and mighty Can-Am cars.

At a time the McLaren drivers' overall resemble the 'after' phase of a washing powder advert, the Woking outfit is said to be eyeing a return to the orange livery so beloved of fans of a certain age.

Though the team has run its new cars in the old orange colours at a number of pre-season tests over the years, most recently in 2006, Ron 'Mr Corporate' Dennis was always against a full-time switch insisting such an idea represented backward thinking.

"This is the livery of McLaren," he continued, referring to the predominantly fifty shades of corporate grey the cars have run in for as long as anyone can remember.

"It has always been a combination of these colours and it will only change for commercial reasons," he insisted. "It won't change just to make a few people in the company happier because they want it orange or they want it yellow."

Perhaps learning from the favourable reaction to Manor’s retro look last season, and previous attempts by the various incarnations of Lotus and Caterham, the team hinted at a change of heart earlier this week when announcing its launch date, the accompanying graphic that was predominantly orange.

Confirming that a change is in the air, speaking in Birmingham at the weekend, executive director Zak Brown, though giving little else away hinted that the new look will please the fans.

We've shown it to the guys and girls at McLaren and we're very excited for our future," he said. "We've just signed off on the livery and I think the fans will be excited to find out what the car looks like both technically and visually."

That said, even a switch to the (admittedly Marlboro) red and white of the Honda days would be better than the current blandness.