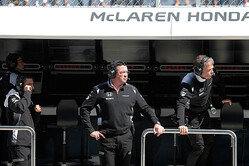 McLaren's Eric Boullier admits that closing on leaders is going to take time... and lots of it.

While 2016 saw a marked improvement for McLaren and its engine partner Honda - team boss Eric Boullier admits that there is still a long, long way to go.

Though podiums, far less wins, remain a distant dream, the Frenchman insists his team is getting there, but admits that it won't be easy.

"The gap has closed," he told Autosport. "But to get where Mercedes is, you can't just copy and paste, There is a way you have to go through.

"You can't do it in three months or six months but in a few years," he added. "It took Renault time and still they are not on top of the game and they started to develop this engine six years ago.

"If we had the best engine this year, we would have won races," he insisted, a masterpiece of understatement. "We know, the GPS traces tell us.

"There is room for improvement everywhere with Honda," he admitted. "It also drives your chassis development, everything is connected. You can't make a car too draggy if you don't have enough power deployment because you lose time. You have to balance all the time.

"We work as one team with Honda to achieve what we want," he concluded.