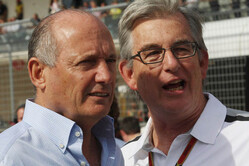 While Ekrem Sami has stepped down at McLaren he remains part of the Woking outfit's management team.

Along with the news that Jost Capito is to leave McLaren just four months after joining the Woking team as Chief Executive Officer, it was widely reported that long-time marketing chief Sami was also leaving the company.

With an association with Ron Dennis going back forty years, not to mention the fact that new Executive Director, Zak Brown, is also something of a marketing expert, it was suggested that Sami was part of a 'cull'.

Not so, says McLaren.

"We can confirm that Ekrem has stepped down from the Board of McLaren Technology Group," a spokesman told Pitpass, "but remains a member of the management team."