Vettel and Ricciardo still at odds over Mexico clash 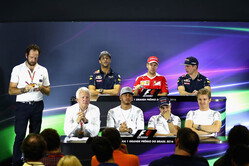 In the same way that Lewis Hamilton and Max Verstappen still fail to agree on the Turn 1 incidents that saw one penalised and the other escape scot free, so too Daniel Ricciardo and Sebastian Vettel cannot agree on the late incident that saw the pair clash and the German subsequently penalised for a dangerous manoeuvre.

In fact, the incidents are intrinsically linked for it was Vettel's frustration at the failure of Verstappen to be forced to hand third position over after running wide in T1 - the Dutch driver subsequently slowing and forcing the Ferrari driver into the clutches of his Red Bull teammate - that led to the clash and the German's expletive ridden meltdown.

With the aid of video evidence, some of it previously unseen by the public before, race director Charlie Whiting explained why the stewards took the view that they did.

"There are three fundamental points there within the rules," he said. "Firstly, if a driver has to take evasive action, if a driver makes an abnormal change of direction in the braking zone and if it could be deemed to be potentially dangerous to another driver. If those three conditions are satisfied then the stewards felt that was a dangerous manoeuvre that should be penalised.

"So that's how the stewards looked at it," he continued, "they felt that Sebastian had moved under braking, that was very clear from the data but also pretty clear from the video of course, it was potentially dangerous and it was an abnormal change of direction that could have led to an accident."

Not so, argued Vettel.

"Obviously I don't agree with the decision that was made," he admitted. "I think I moved over once to defend my position. After that, I think I gave him enough room on the inside. I kept the car straight for more than the majority of the braking.

"The reason why he locked up so bad is because there was no grip on the inside," he continued. "It's something that I think we all knew. There were people locking up on other corners when they were off the line. I don't think it was actually dangerous for Daniel at that point."

"I thought it was the right decision," countered Ricciardo, "but from an outside point of view for fans it's probably a bit hard to understand and digest it all after the race.

"When you're in that braking zone, once you're committed, especially when you're overtaking, you're putting the car on the limit if you're trying to outbrake someone, so you're already on the edge. Any sort of move or something then, you're not really in control at that stage, hence why I lock up the brakes and it all turns into a bit of a mess.

"It's the only real part where we can't really get out of much once we're on the brakes," he added. "When you're down the straight and someone defends, if they move one way you can obviously move the other or whatever. But then once you're committed to the braking it's hard to pull out at that stage."