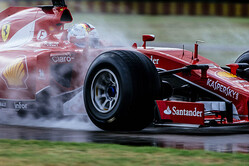 Pirelli has revealed that feedback from the teams is now giving a far better idea of 2017 downforce levels and loads.

While on-track testing of the 2017 tyres has been restricted to just three teams - Mercedes, Red Bull and Ferrari - all the teams have been giving their own feedback to Pirelli based on their simulations.

While the initial feedback showed a worryingly wide disparity, as work has continued so the figures have begun to converge thereby allowing Pirelli to better understand what to expect next season, especially in the early races.

"The first time we received the predictions there was quite a big gap across the teams," Mario Isola told Motorsport.com. "Then we took their simulations and we prepared a model of tyre that we supplied to the teams. The work continued, and the teams gave us another prediction.

"Now we are seeing that we are converging to a narrow band," he continued. "Now it is much more precise.

"I think there is a good estimation if we consider the expected performance at the beginning of 2017," he added. "We also receive an estimation for the end of 2017.

"Of course you have to consider the rate of development of one year, with a completely new car. So for the end of 2017, it's a bit wider," he admitted. "But for the beginning, we are converging to more or less the same prediction. The simulations we are receiving at the moment, the delta is still more than one second. But we consider that one or two seconds difference is a good estimation, we are not five or six seconds off."

Last week saw Red Bull conclude its testing programme, with Pierre Gasly in action at the Yas Marina in Abu Dhabi where the Frenchman completed 286 laps of wet weather testing over the course of two days.

Next week sees Ferrari bring the programme to an end, the Italian team in action at Yas Marina for three days as it runs the 2017 slicks.

The final test comes a week later when all eleven teams get to try the tyres in a one day test following the season closer in Abu Dhabi.