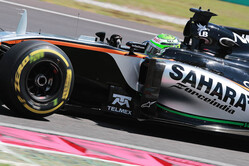 Sahara Force India's Nico Hulkenberg will start the United States Grand Prix from seventh on the grid, with teammate Sergio Perez lining up in eleventh.

Nico Hulkenberg: "Lining up seventh on the grid is as good as it gets today. Once again, we're the first after the three big teams, which is where we can realistically expect to be. We knew we would perform well here, but I am actually quite surprised by the big margin we have over the cars behind us. The start and the first lap will be fundamental for the race, so I will need to keep out of trouble, put my head down and push hard. Choosing the right strategy is where we will focus tonight - I think there are a few different options, so we will need to see which one gives us the best opportunity. Looking at the gaps ahead and behind us, we may be in for a bit of a lonely afternoon, but I wouldn't mind it at all - I just want a strong result!"

Sergio Perez: "It has been a messy day - not only qualifying, but final practice as well. For some reason, I've been quite a long way off the pace and we've lost some of the performance we had yesterday. This morning we found an issue with one of the components at the rear of the car, which impacted on my pace. I thought we had solved that going into qualifying, but I still believe there is an issue with the car because the data showed it was very difficult for me to match my teammate in the braking zones. The car also felt nervous through the high-speed corners. Hopefully we can understand where I'm losing out and figure out a solution so that it does not impact on my race pace tomorrow."

Robert Fernley, Deputy Team Principal: "The car has been quick here straight out of the box and it's satisfying to see Nico qualify in seventh place. He clearly had the edge over the cars behind him in Q3 and should be able to race well from there. Being right behind the top three teams is probably the maximum we can hope for on a regular day at this stage of the season, but we still needed to get the best out of our package to be there. Sergio has struggled for confidence with the car today, but starting from eleventh place could open up some opportunities for us in the race. We will analyse the data tonight to see if there is anything we can do to restore the balance he had with the car yesterday. With the conditions likely to remain the same for tomorrow, we expect to be competitive and bring home a good result."