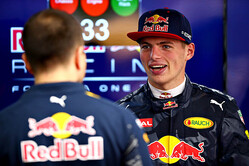 Max Verstappen is the sole recipient of Renault's latest upgrade this weekend.

While Renault is introducing an upgraded power unit this weekend, its final upgrade of 2016 and at a cost of 3 development tokens, the unit will only be availalbe to Max Verstappen.

Only one unit was available for this weekend, and while there will be claims of favouritism, the French manufacturer is at pains to point out that the introduction fits in perfectly with the Dutch racer's engine cycle.

"There is no tactic, no strategy, no preference," Renault managing director Cyril Abiteboul told Autosport. "We like Max, but it is just the natural way of managing the engine pool.

"This weekend it was the plan to introduce a new engine for Max, so he is the one enjoying the improvement of the engine through the utilisation of three tokens," he continued. "All the engines will benefit from a new fuel developed with Total, and we are very happy with that positive development.

Verstappen, who took on Daniil Kvyat's allocation when he replaced the Russian at Red Bull is out of sync with both his teammate, Daniel Ricciardo, and the works Renault drivers, all three of whom are already on their fourth units. This is because Kvyat didn't make the grid in Melbourne and crashed out of his home Grand Prix on the opening lap, thereby reducing his engine mileage.

"I don't want to go into the details of what has been changed, and that's one of the beauties of the tokens because with this process we don't have to document what we are changing," said Abiteboul, who believes the update could be worth as much as 0.2s.

"But it's in area that is providing more power, so we expect an extra gain from that development. It is also being introduced to test and learn some concepts for next year, which are all looking fairly positive."

The update leaves Renault with 18 tokens, while Honda has 3 and Mercedes 6, Ferrari having used its entire allocation.