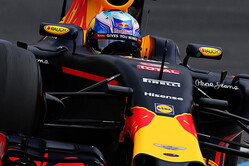 Daniel Ricciardo: "We expected to be floating around the top five and we were one thousandth of a second off fifth. It's a little frustrating but at least there were no major surprises. Qualifying on the soft tyres would have been ideal but the pace was really high and our lap time was close to the cut off. We were forced to use the supersoft instead to be on the safe side getting into Q3. If we had qualified on the soft tyre we could have had a good fight with Ferrari but that will be a little harder now we are on the supersofts. We knew Williams would be quick around here but with DRS and being strong on the brakes we can still pull off some moves. I think we can have good race pace and it would be nice if we can find an edge overnight but either way we can have some fun and challenge for top five."

Max Verstappen: "I'm actually pretty happy with qualifying today. I thought we would be more behind but actually everything was very tight. We lost radio communications in the end so I didn't know where I was and when I came back and saw that I was seventh I thought that's not too bad. We're within three hundredths to P5 so I think we can't complain, especially with the compromises we have to make with the downforce levels. You never know what will happen tomorrow, normally we're a bit stronger in the race than in qualifying, so let's hope for a good race. Of course you always want to be further ahead but we have to be realistic and this track is a challenge for us."

Christian Horner, Team Principal: "Mercedes were obviously in a class of their own today. At a circuit we knew would pose the biggest challenge to us on the calendar; sixth and seventh is about where we realistically expected to be. We are very close to the Williams of Bottas and hopefully at the grand prix tomorrow we can show a stronger race pace."