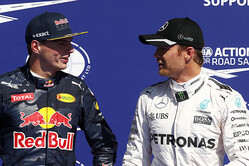 Nico today took his 28th career pole position - his second at the Circuit de Spa-Francorchamps and sixth of the 2016 season so far. Lewis completed a single run on SuperSoft tyres in Q1, setting a time within 107% of the fastest lap as required, before parking for the afternoon. He will start from the back of the grid after a combined 55 place grid penalty for three Power Unit changes.

Nico Rosberg: We had a difficult weekend until Qualifying. Especially, this morning we were thinking that we were off the pace a bit. So I was really happy to grab pole today. The Red Bulls were quickest on the long runs on Friday, so we need to be at our best to beat them. The tyres are a big challenge in the heat here this weekend. The degradation is very high. My disadvantage at the start is that I have a harder tyre with lower grip, so Max should get off the line quicker on the Supersoft. I reckon that, with some luck and a maybe a Safety Car, Lewis can climb up to the top very quickly, so he can't be ruled out either. In any case, I'm pleased with my qualifying and looking forward to tomorrow. It will be an exciting and intense race.

Lewis Hamilton: Firstly, the team have done an incredible job - the guys and girls back at Brixworth building the engines and then everyone here who've been kitting and fitting them - so a huge thank you to them. To bring a new engine here, take it out after FP1, put another new one in for FP2, then do the same again before FP3 was just an unbelievable job. I have a massive 55 place grid penalty today - but I also now have three new engines in the pool for the season, which is positive. In terms of today, it was definitely a weird qualifying session for me. There was no point in showing my pace. It was all about race preparation. The key for me is making sure I come out of tomorrow having lost the fewest points possible - and that meant having as many fresh sets of tyres available as possible and making sure the car was set up well. I can't say right now what the plan is - the team will know already what's best and we'll discuss that later. We're not easily the quickest here. We're all going to have massive degradation and looking after the tyres will be a struggle for everyone. It's going to be far from an easy, breezy day but where I can just pick people off. There will be lots of pit stops and who knows what else. I'm going to have to battle my way through the traffic - but I'll give it my best as always and see where I end up.

Toto Wolff, Head of Mercedes-Benz Motorsport: We had completely opposite outcomes from today's session with Nico taking a great pole but Lewis doing the minimum he needed to do in order to be able to start the race from last place after his engine penalty. For Nico, it wasn't an easy job. We have struggled with the balance of the car this weekend but he managed to secure the strategic advantage of making it through Q2 on the soft tyre In Q3, we were overheating the super soft compound a lot but Nico managed to do enough to squeeze out the performance ahead of Verstappen. So a perfect job from his side. Lewis did the perfect job as well in totally different circumstances. He has taken a very positive approach to the challenge this weekend and has been very clear about focusing all his practice work on the race. He did the minimum today but this leaves him fresh tyres and the most strategic options for the race, which was the right choice. Finally, I must pay tribute to the fantastic work from the team in Brixworth and the team in the garage to implement our strategy of stockpiling the power units. So far, they have delivered an enormous workload without mistakes and in a perfect way. They are working under a lot of pressure but it shows the quality of our team that we have been able to deliver a smooth weekend so far. But the most important bit is now ahead of us. The tyres will be difficult to manage in the high temperatures tomorrow and I think we can expect a lot of action on the track and in the pits. It's now up to us to make the most of our opportunities to score the best possible result.

Paddy Lowe, Executive Director (Technical): Not quite the normal qualifying routine with Lewis' grid penalties to consider. We decided to do a single short run with him during Q1 to get him safely within the 107% limit and then park the car to save the maximum number of tyre sets for tomorrow, giving him plenty of strategic options for the race. That left our bid for pole down to Nico. We could see from practice that it was going to be very tight between ourselves, Red Bull, Ferrari and Force India. We also had the challenge of getting through Q2 on the soft tyre, as we don't consider the SuperSoft to be a good race tyre here this weekend. Nico produced a fantastic lap in Q2 to go fastest on the Soft and, although Q3 was tighter than we had hoped after the Q2 times with Nico only finding a tenth and a half between the compounds, he delivered a strong lap to take pole. Tomorrow is going to be a very tough race - particularly managing the endurance of the tyres - so we can expect an exciting afternoon once again at this spectacular circuit.