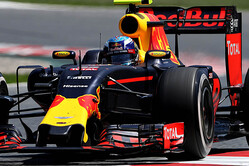 Max Verstappen: "I felt like I had great pace today so once the track dried up I just tried to have a go. In the beginning I had a lot of spray so it was hard to see where I was going, especially in the first sector. Once I passed Nico I felt like I was closing on Lewis but then he pitted for slicks. We maybe stayed out one lap too long but in the end the race was great and the car was working really well. I had a great battle again with Nico afterwards but as it dried the Mercedes just had too much speed on the straights. I tried to keep up and there was no pressure from behind so I just concentrated on doing my own race. I had a few moments in Turn 1 which was a bit tricky so I had to be careful there but I hear a few others also struggled. The move on the outside at Becketts was fun, he was finding the inside so I thought let's try the outside. It was a risky move for sure. The car had the grip and I had the feeling so it worked well. There's a bit of run off there anyway so I had room if it went wrong. In the end we only finished roughly eight seconds behind so I think that is really positive going forwards and shows we are closing the gap. The fans here were great, I couldn't believe how loud they were and they really supported me. Understandably they were behind Lewis but they got behind me loads also which was great to see."

Daniel Ricciardo: "I think for the team and for the points it was really good. Obviously we gained a bit on Ferrari which is nice, but for me it was lonely and a bit boring. We lost a lot of time with the Virtual Safety Car and that was just bad luck. This was out of our hands and there's nothing we could have done different. It just came at the wrong time for me and we lost the position to Perez and then more than ten seconds behind the leaders. Then not stopping again for the rest of the race you can't catch this much. When the pace in the front is what it is you can get a tenth here or there but not half a second per lap. I was ready for a battle and some action today, but unfortunately it wasn't given to me. It is what it is now and hopefully Budapest works better."

Christian Horner, Team Principal: "A fantastic race at our local track and a real fighting drive from Max. The highlight of which was passing Rosberg round the outside in Becketts. Unfortunately we didn't quite have enough pace in the dry conditions to stay ahead but it was very satisfying to get both cars to the finish in third and fourth. Daniel was unfortunate in losing a little bit of time under the Virtual Safety Car, he pitted at the optimum time and managed to clear Perez but the lead group was just too far down the road. Plenty of points in the Constructors' Championship and a great result in front of so many staff from our factory just down the road from here, and we may get better yet. We look forward to Hungary in two weeks' time and racing a track that hopefully will play to our strengths."