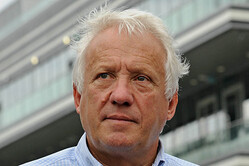 The FIA has warned drivers that a "zero tolerance" approach will be taken towards drivers who exceed track limits at Silverstone.

Following numerous incidents yesterday, and at a time the FIA is trying to get drivers to recognise track limits without the need to introduce the sort of measures witnessed in Austria last week, the FIA has warned that a "zero tolerance" approach will be adopted for the remainder of the British GP weekend.

"Further to the discussion in the drivers meeting yesterday evening I would like to confirm that we will again be adopting a "zero tolerance" approach to cars leaving the track at turns 9, 15 and 18 during qualifying," said Race Director, Charlie Whiting, in a statement this morning.

"Unless we are satisfied that a driver left the track at these points for reasons beyond his control, having been forced off the track for example, every lap time achieved by leaving the track will be deleted in accordance with Article 12.3.1.d of the Sporting Code.